Jose Mourinho admitted that he was “tired” as he sat down for an interview with BT Sport in his living room just hours after guiding his Chelsea side to the Premier League title.

The Portuguese coach watched his side beat Crystal Palace 1-0 at Stamford Bridge thanks to Eden Hazard’s goal on the stroke of half-time.

The victory handed Mourinho his third Premier League title, but instead of celebrating with his players after the game, the 52-year-old returned home for a well-earned rest.

Asked how he felt barely two hours after winning he title, Mourinho replied: “Tired (laughs) tired… Obviously I am very happy and very proud of the boys.

“New group, new team a lot of players without a Premier League title. With the heavy weight of succeeding a fantastic generation that Chelsea had.

“No more Frank Lampard, no more Ashley Cole, Michael Essien – all these big boys that were crucial in the last decade. 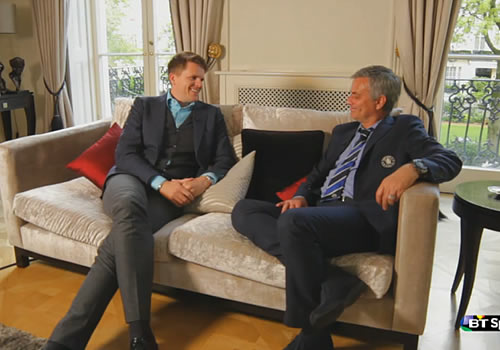 “New team, new people, new kids and so so much work we did together in the last two years and obviously I am so happy but, as I was saying yesterday, when I was asked what I would do after the game, go home.”

Chelsea, who are 13 points clear at the top of the table, have now won four Premier League titles since Roman Abramovich bought the club back in 2003.

To see the full interview with Jose Mourinho watch a special edition of Football Tonight at 6:30pm on Monday on BT Sport 1.

Mesut Ozil voted Arsenal player of the month for April