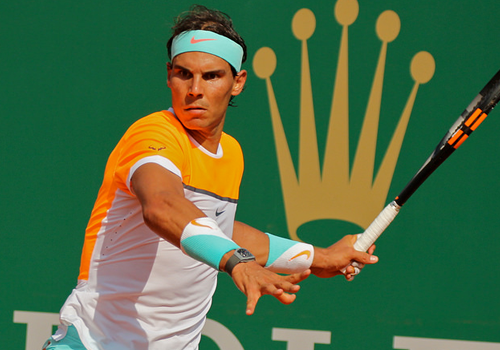 The intense, bullish, bristling teenager named Rafael Nadal who burst onto the tennis stage in a remarkable 2005 with a near clean sweep of South American and European clay has, from the very first, proved to be something of an enigma.

For it soon became clear that the glowering, muscular Spaniard who seemed to reinvent clay-court tennis almost before our eyes was a very different animal from the quietly spoken boy-next-door who began to fill press conferences and attract a new generation of tennis fans.

In those early days, the confident, all-conquering clay master who stormed through Monte-Carlo, Barcelona, Rome and Roland Garros provided the perfect counterpoint to the poised and elegant Roger Federer in what became a rivalry that captured the imagination. Yet the young pretender would seem to resent not at all that he was pinned firmly at No2 in the rankings for years on end.

Of course, his time at the top eventually came, along with almost every trophy and accolade in the book: All four Grand Slams, a record number of Masters titles, Olympic gold and the Davis Cup.

But as others have risen to take his place, or he has fought to regain dominance, he has preserved that same youthful equanimity, even when, as happened this week, he fell outside the top five for the first time since that magical 2005.

These days, he is invariably just as gently spoken—even unguarded—as was the teenage Nadal, though he is now more eloquent courtesy of vastly improved English and the experience of working in the cut-throat world of competitive sport.

It was to that slip in the rankings and, by extension, the tough times he has endured since injury and appendicitis curtailed his 2014 season, that the conversation turned ahead of Rome. Because Nadal, the owner of nine French Opens, eight Monte-Carlo and Barcelona titles and seven Rome titles, arrives in Rome this year with just one clay title to his name, the Buenos Aires 250.

He was quick to give his current form some much-needed perspective.

“I don’t consider that things are not going that well. Last three tournaments I played the semi-finals and final. It’s true that I’ve been on and off, not enough consistent. [But] you are wrong if you think last week was a negative week for me. Last week was positive for me because of confidence and a lot of other things. Now let’s see if this week I can confirm the improvement of last week.”

He went further, revealing that he pays more attention to the ‘race’ than the rankings—for it is the ‘race’ that determines the end-of-year rankings and also who qualifies for the World Tour Finals.

“I don’t see things as that bad. I am No6 in the race. It is not a disaster. The rest of the players when they come back from a period without playing, I don’t see them winning straight away. I don’t think things are that easy. Andy—the last year has been tough too, but he’s playing great this year. I know I can play better matches this year. [I’m] not consistent enough—but not that bad. Monte Carlo was a positive tournament. I played a good tournament last week. Only bad tournament is Barcelona where I played really bad.”

It is a precious gift in this business, the ability to see the ‘glass half full’. Federer has used those very words many times over, and Novak Djokovic, while understandably brimming with the confidence at the moment, determined to refocus, work harder, search for fresh solutions after the slight dip that followed his superlative 2011.

And Nadal has that same pragmatism in spades.
“I arrived yesterday, I practised as I have every year, and I came today to the tournament to practise for two hours, and then I’m here doing press. I don’t see the change. Being No7 or No4, not a lot of difference.

But Nadal is also one of the most reflective players to take the hot-seat in a press conference, a man who talks as he feels rather than with the managed gloss that so often accompanies fame and fortune.

“Win or lose doesn’t change life in general. Last year I won in Roland Garros, and today I am not thinking about what happened last year. You will ask me again next year… if I am worried or not worried.

“Life changes, career of everyone changes. I am happy playing tennis, I am happy with my life… Without being very consistent, No6 in the race is not a bad number after coming back from an injury.

“Obviously today I am not as good as I was. I don’t know if tomorrow if I’m going to be as good as in the past. [But] I am happy. Life has been fantastic with me. Today I am not winning as much as I did in the past, but life continues.

“Let’s think about playing a good tournament here, finding the good and positive feeling I had last week. I am positive this week. I was much more worried one month ago after Miami.”

“If things are not going well it is because I am not playing well, not because the coach is not saying the right things… If at any time in my career I change somebody on my team, it will not be because I am winning or losing… With those people, I was able to win all the things I have won in my career—and I don’t think my career is a bad career.”

Never was a truer word spoken—and rarely by a more intriguing athlete.