Gary Neville calls out Liverpool legend over bet on Twitter 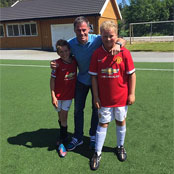 Gary Neville is refusing to allow Jamie Carragher to squirm his way out of a forfeit after the Liverpool legend lost a bet with the former Manchester United defender.

The former England centre-half had a wager with the seven-time Premier League winner that Tottenham flop Paulinho would scored at least 15 goals in his first season at White Hart Lane.

The Brazil international, who is being linked with a move to Chinese side Guangzhou Evergrand, has only managed to net six times in the Premier League for the north London side over the past two seasons.

Neville demanded that Carragher pay up on the bet earlier this week, and the Liverpool legend took to social media on Sunday afternoon to offer up a compromise to the former United right-back.

This is as good as your going to get @GNev2 pic.twitter.com/SOWZjSL1WH

However, the two-time Champions League winner refused to accept Carragher’s offer, and he informed his Sky Sports colleague that there is a United shirt in the post for the former Reds defender.

Don't think so James!! The kit will be with you by the end of the week! It's ordered. A bet is a bet! https://t.co/uIYoFX6djV

A Liverpool supporter, David Thompson, warned Carragher not to don the Red Devils shirt unless the retired England centre-half wants to catch “a disease”.

But witty Neville responded to Thompson’s jibe in emphatic fashion, much to the delight of United supporters on Twitter.

Worth a try he might catch that disease called " Winning" and spread it through your lot! https://t.co/eYTZAAWhCO