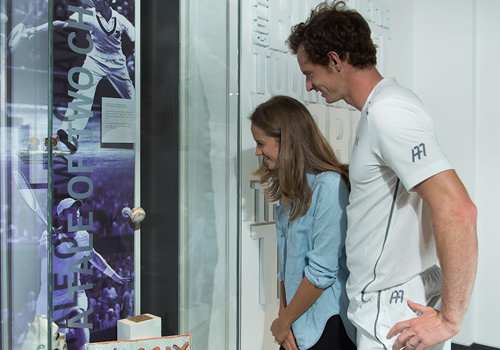 Kim and Andy Murray this week visited the Wimbledon Lawn Tennis Museum to view a new exhibit – an extraordinary piece of tennis history – in support of the Champions’ Raffle.

The new exhibit is one of three identical white tennis balls signed by both Murray and tennis legend Fred Perry, the only known piece of tennis memorabilia to have both signatures.

The balls were a gift to Murray from tennis fan Gail Sargent, who spotted him as a young player and wanted him to have the balls signed by Perry. Following his win in 2013, Murray signed the balls too and a small piece of tennis history was made.

MORE: Murray once again throws his weight behind charity fundraisers

Unknown to Murray, when Sargent gifted him the balls she was already fighting ovarian cancer, a battle she lost in 2010. As well as donating one of the balls to the Wimbledon Lawn Tennis Museum, both in her memory and to raise awareness of the disease, one of the remaining two balls is to be raffled off to the public, with all proceeds going to the St Peter & St James Hospice where Gail received care at the end of her life.

“I am incredibly grateful to Gail for the gift she gave me all those years ago,” Murray said.

“It didn’t seem right to just keep them hidden away. So many people are touched by cancer, so I’m really hoping we can raise a lot of money with this raffle.”