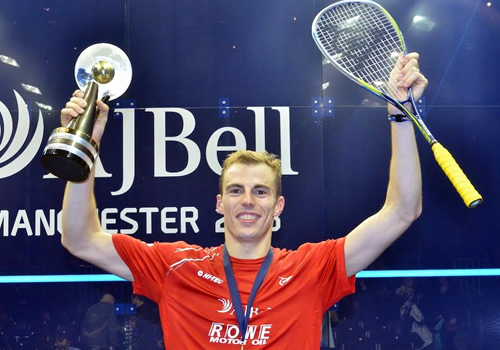 Squash star Nick Matthew says he feels “humbled” to have been honoured with an OBE by Her Majesty the Queen in her Birthday Honours List.

The 34-year-old has added another prestigious title to his collection of awards and trophies and was delighted by the news.

“I know my Mum will be beside herself so I’m almost happiest for her!” said Matthew.

“Being a father myself now, I think it makes you realise how proud your parents are of you. Being given an honour is something which transcends anything you achieve on the court and I’d like to think that, when my daughter Charlotte is a bit older, her Daddy having a OBE is something that she can be dead proud of too.

“It’s incredibly special for me personally but it’s also great to see squash recognised like this. I think it’s a really great sign for our sport.

“It’s very humbling when you look at the other people on the list and you see how much they have achieved in different areas of life, especially all the people who have devoted their lives to helping others.

“The letter itself actually went to my old address, where my best mate Neil (Guirey) lives. He called me to say I had this very official letter and I couldn’t wait to hear what was in it, so I had to ask him to open it and read it down the phone to me. I think he was buzzing even more than I was.

“They tell you to keep everything so secret, so it’s quite funny that my letter got opened by someone else, but fortunately Neil is very discreet!”