"For Wimbledon I just want to play, I don’t want to look how far I can go," Philipp Kohlschreiber tells Marianne Bevis 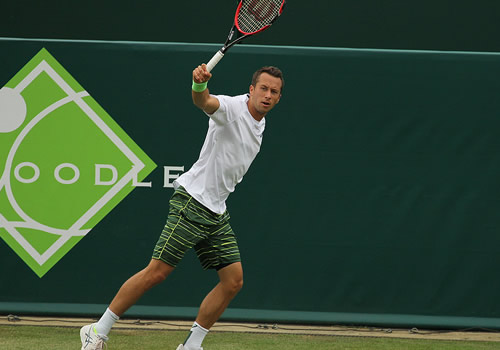 Philipp Kohlschreiber in action at The Boodles Photo: Marianne Bevis

The Wimbledon men’s seedings were released on Wednesday, and it’s fair to say there were not too many surprises.

The two who contested last year’s final, Novak Djokovic and Roger Federer, were top of the pile, in accord with their rankings, with two of this season’s stand-out stars slotted into the other ‘semi-final’ places: Andy Murray and Stan Wawrinka.

Heading the list was Djokovic, more than 4,000 points clear of the field and with a Grand Slam and four Masters titles to his name. Next came Federer, more than 2,200 ahead of No3 Murray, who has a similar margin over Wawrinka.

Around a 1,000 points then separates the top eight seeds from the next eight, but as the eye scans down towards 32, to the ones who should win their opening couple of matches at the very least, the points separating each seed diminishes at a pace.

Reach No33, Philipp Kohlschreiber, and he is adrift from the six men above him by fewer than 100 points. Had he reached the semis at his home tournament in Halle, he would have earned 180 points—and who knows what Wimbledon advantage. As it was, though, he had the misfortune to meet old friend Roger Federer in the first round—and earned no points at all.

A misfortune, too, because—arguably—the German played the better tennis in their long, tense three-setter than the defending champion, who was competing in his first grass match of the year while the 2011 Halle champion Kohlschreiber had already reached the quarters in Stuttgart, losing another long three-setter to Gael Monfils.

Against Federer last week, the 31-year-old German led Federer 5-3 in the final set tie-breaker, but the Swiss played clutch at the key moment and, as had been the case in all eight previous meetings—three of those at Halle—Federer won.

So yes, the amiable Kohlschreiber admitted after playing a rather less competitive match at The Boodles this week, he would rather play someone else.

“It’s always very tough to win against him, so I prefer [to meet] a player I have better chances against, but the matches we play are always very good and we are also good friends outside the match area. We practise a lot and joke around, so it’s great. He’s a huge gentleman, and a great inspiration also for my tennis.”

Kohlschreiber has a game almost as suited to grass as Federer himself—nimble, varied, with a kick serve, plenty of flexible slice and flat power on his single-handed backhand, and plays with a smart tactical brain. He reached the quarter-finals of Wimbledon in 2012, his best result at a Grand Slam, and took Federer to four sets in their only meeting here in 2009.

Right now I’m feeling really great. I worked hard on my return, too, so that’s of course a key factor on grass

And he likes this surface: He has a better winning percentage on the green stuff than on clay or hard courts, even without the kind of big power game that thrives on the fast, low-bouncing turf.

“[Grass] is always tough… you know either way, if you play a guy who’s very strong on serving, you prefer to play him on clay because you have more time. I think Roger’s a great server, not the fastest but he has good variation, and Monfils is good server and I handled those guys pretty good. I played [Jerzy] Janowicz who is a very good guy serving big bombs, and played a very good match, so right now I’m feeling really great. I worked hard on my return, too, so that’s of course a key factor on grass.”

There is also, of course, that elegant backhand, one of the strengths in his arsenal.

“I never played with two hands… it was the way to play when I was young. I don’t know why I didn’t change, but I don’t regret it. I think I have a very good backhand I’m very happy with it. I would change a little bit on my forehand side, the grip maybe, if I had the chance to come back, but I’m very proud of how I play my backhand.”

That Halle loss ended up costing him dear, of course, but at the age of 31, he feels he’s still playing some of his best tennis.

“I’m feeling healthy, strong actually. The results could be a little better—first round [loss to] Roger and quarters in Stuttgart—it’s not enough for my expectations, for what I want to achieve (but) I think I’ve played pretty good at the moment, so I have to work harder, and if you work hard, normally the results will come.”

So how did he view his chances at Wimbledon?

“I always said I want to reach this and that, and this year I struggled a little bit with my expectations, so for Wimbledon I just want to play, I don’t want to look how far I can go. So far this year in the Slams it went wrong when I said I want second week, so this year no goals, just play every match and hopefully there are gonna be many!”

But whatever gods Kohlschreiber has upset this month, they were out in force again when the unseeded names were pulled out of the Wimbledon hat. Not Federer this time but the top seed, Djokovic. The first-round match from hell.

Kohlschreiber saw a little of the funny side when he tweeted from The Boodles an hour later:

Just Met my opponent @DjokerNole @TheBoodles – he started attacking me even before the match Starts pic.twitter.com/iH88t12Hf2

But to think that he could have avoided such a fate with just 20 or so more points—one match-win—is a tough proposition, especially as he was inside No32 only a week ago.

Not that he bears Federer any ill will—aside from one little dig about his age: “He’s much older than I am!” Federer is 33 to Kohlschriber’s 31.

“He achieved much… He enjoys to play on Centre Court. He’s a favourite almost everywhere he plays, and I think that’s a huge factor for everybody—if you play in front of very nice crowd, that’s a great advantage.”

Nice: it’s a word that ‘gentleman’ Federer also uses a lot. One of the Swiss star’s own watchwords is “It’s nice to be important, but it’s more important to be nice.”

It seems an apt word for Kohlschreiber, too—though he may have hoped that nice Mr Federer had had a word with the tennis gods on his behalf.