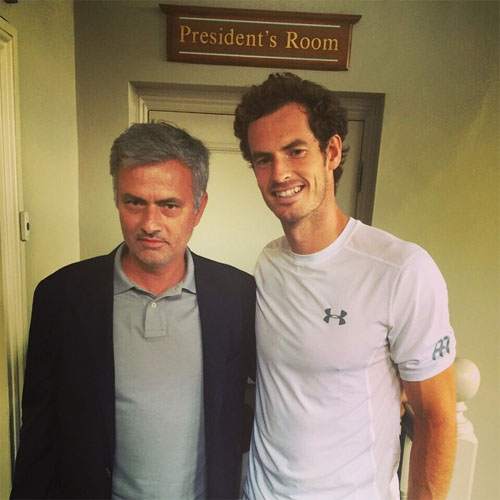 Andy Murray may have edged into the semi-finals at Queen’s on Friday night, but the British number one looked even happier to meet Chelsea boss Jose Mourinho.

The three-time Queen’s champion needed three sets to get past Luxembourg’s Gilles Muller in the quarter-finals after a 3-6 7-6 (7-2) 6-4 victory in just under two hours.

Mourinho, who masterminded Chelsea’s double success last season after winning the Premier League and League Cup, was a special guest at the ATP tournament in Kensington.

And 27-year-old Murray was clearly delighted to brush shoulders with the Special One, and Mourinho even managed the outline of a smirk for his snap with the former Wimbledon winner.

Murray wrote on his Instagram page: “Great catching up with Jose after my match today. He loves his tennis. #Queens”

The Chelsea manager is a keen tennis fan and the Portuguese coach has regularly been spotted at the Grand Slam and the ATP World Tour Finals at The O2 since his return to England.

Speaking after his quarter-final win, Murray said: “I think he seems to be quite interested in tennis. He spent a few days obviously this week and maybe will come tomorrow or on Sunday.

MORE: Murray in a good place after quarter-final win

Mourinho has previously spoken of his pride at seeing Murray become the first British man to win Wimbledon in 77 years back in 2013.

“I’m a big fan. The one I felt really was the [Andy] Murray victory, because I felt it has something really special for him to win it after so many years,” Mourinho said in April.

“I’m not British, but on that day I felt it almost as much as a British man.”