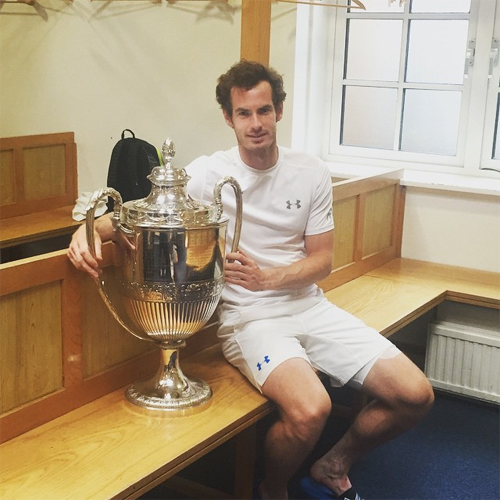 Andy Murray was quick to pose for a snap with the Queen’s Club trophy after the British No1 beat Kevin Anderson in Sunday’s final.

The 28-year-old made light work of the South African after the 2013 Wimbledon champion sealed a 6-3 6-4 victory to seal his fourth Queen’s crown.

Murray was given a couple of hours to recuperate after the two-time Grand Slam winner had earlier beaten Viktor Troicki 6-3 7-6 (7-4) in their rain-delayed semi-final.

The Scot has joined the likes of Boris Becker and John McEnroe as a four-time winner of the competition after previously winning Queen’s in 2009, 2011 and 2013.

And Murray sat alongside the giant trophy in the locker room for a photo which he uploaded to Instagram following his 64-minute win against Anderson on Sunday.

The Scot will be back in action in London in just over a week with Wimbledon set to commence on 29 July.