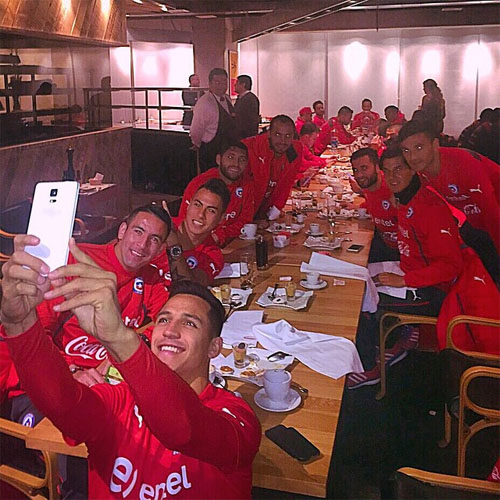 Alexis Sanhez and his Chile team-mates have plenty to smile about after the host nation reached the knockout stages of the Copa America.

Chile topped their group despite the controversy surrounding Arturo Vidal after the Juventus midfielder was accused of drink driving following his involvement in a car crash.

Sanchez and his compatriots need to get past Uruguay on Wednesday to book their place in the semi-final, where they’ll meet either Boliva or Peru for a place in the final.

And the Arsenal forward was doing everything in his power to ensure the Chile squad remained relaxed as the 26-year-old orchestrated a selfie during the team dinner.

Sanchez posted the above photo and wrote on his Instagram page: “… A selfie and Dinner with the team good night”

Sanchez hasn’t scored a goal in the Copa America so far, although Juventus playmaker Vidal has netted three times.

The Gunners forward enjoyed a successful first season in the Premier League after he scored 16 goals and made eight assists in 34 games.

The Chilean, who moved to Arsenal in a £35m deal from Barcelona, also won the FA Cup at Wembley in May.