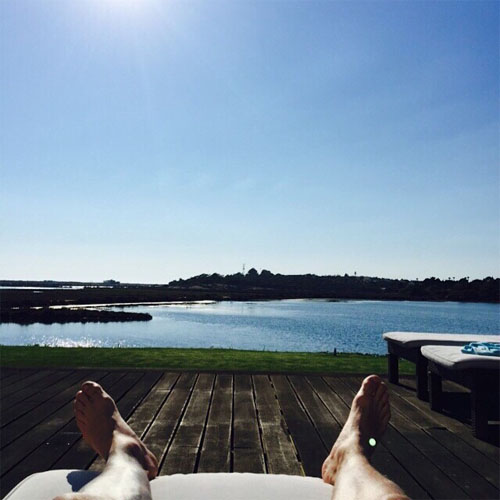 Aaron Ramsey declared his excitement ahead of the 2015/16 Premier League season from the comfort of his sunbed on Wednesday night.

The Arsenal midfielder was putting his feet up in the full glare of the sun after having helped Wales seal a famous 1-0 win against Fifa’s number-two ranked side Belgium at the weekend.

Ramsey has enjoyed a good end to the 2014/15 campaign after Arsenal won the FA Cup and finished third before Chris Coleman’s Wales side secured top spot in competitive Group B.

But the 24-year-old appears to have an insatiable desire to play football as the Gunners star posted about the newly-released Premier League fixture list.

Ramsey wrote on the photo-sharing app: “Feet up, very relaxing day in the sun! Can’t wait for the new season, anyone else a bit excited now the fixtures are out?”

The Arsenal midfielder has enjoyed a successful campaign with the north London side this term, scoring six goals and making six assists in the Premier League.

Ramsey also scored three goals and made one assist in Arsenal’s run to the last 16 of the Champions League this term.