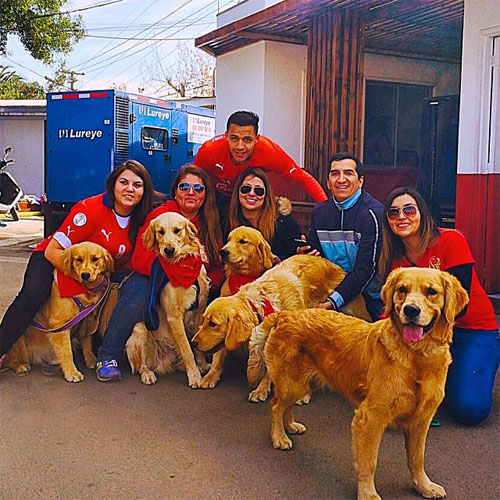 Alexis Sanchez is undoubtedly one of the biggest dog lovers in the Premier League.

The Arsenal striker doesn’t hesitate to regularly upload photos of his golden retrievers Atom and Humber on his Instagram page.

The 26-year-old has even flown his adorable pets out to Chile to support their national team during the Copa America.

And it is a move that has paid dividends after Atom and Humber made some new friends on Saturday, much to the delight of their famous owner.

Sanchez posted on his Instagram page: “Friends of atom and humber.”

Sanchez was one of the Premier League’s standout performers following his £35m transfer to the north London club from Barcelona last summer.

The South American forward scored 16 goals and providing eight assists for his team-mates in 35 appearances.

The former Udinese man helped Arsenal finish in third place in the Premier League to ensure Arsene Wenger’s side qualified directly for the Champions League group stage next season.