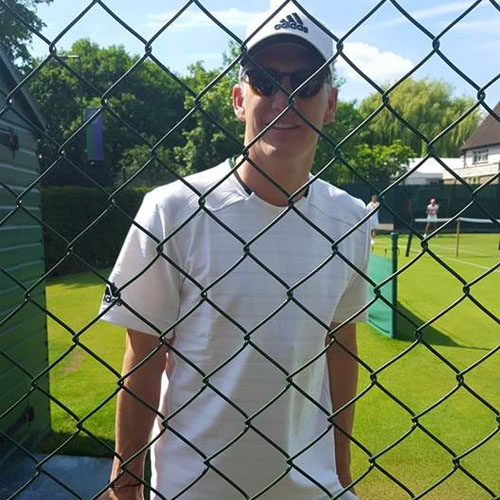 Bastian Schweinsteiger was helping his girlfriend Ana Ivanovic with her Wimbledon preparations on Wednesday amid reports linking the midfielder with a move to Manchester United.

The Germany international has been dating the 2008 French Open winner for over six months and Schweinsteiger was in attendance at Aegon Classic in Birmingham earlier this month.

The 31-year-old has been heavily linked with a move to the 13-time English champions in recent weeks with one year remaining on his current deal with the Bundesliga holders.

The World Cup winner was snapped by United fan Sacha Mahoor at a practice court in the Wimbledon grounds, with the midfielder seemingly a more than willing hitting partner for Ivanovic.

Schweinsteiger has won eight Bundesliga titles, eight German Cups and the Champions League during a 14-year spell at Bayern.

The Germany midfielder has scored 67 goals in 500 appearances in all competitions for the Bundesliga champions.

Louis van Gaal, who signed Memphis Depay in a £25m deal from PSV Eindhoven in April, coached Schweinsteiger during his two-year spell at Bayern.