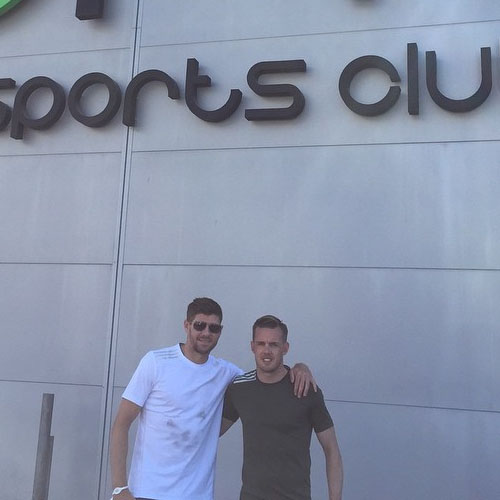 Steven Gerrard isn’t resting on his laurels despite having called time on his Liverpool career in May.

The Reds midfielder is currently on holiday in Ibiza as the 35-year-old enjoys a well-deserved break following an emotionally and physically draining season.

Gerrard is set to link up with Major League Soccer outfit LA Galaxy in the coming months after having agreed a deal with the American club in January.

And the Liverpool legend couldn’t resist a gym session with his pal, Cardiff City striker Craig Noone, on Thursday morning.

Noone posted the above photo and wrote on Instagram: “Great little run and gym session done with @stevengerrard at B Fit Gym Ibiza #inthebank! #motivation ”

Gerrard signed off on his Liverpool career with a goal in his final Reds appearance at Britannia Stadium last month.

However, the midfielder’s strike was a mere consolation in a 6-1 defeat by Stoke City.

Liverpool finished in sixth place in the Premier League table after back-to-back defeats against Crystal Palace and Stoke in their final two games.