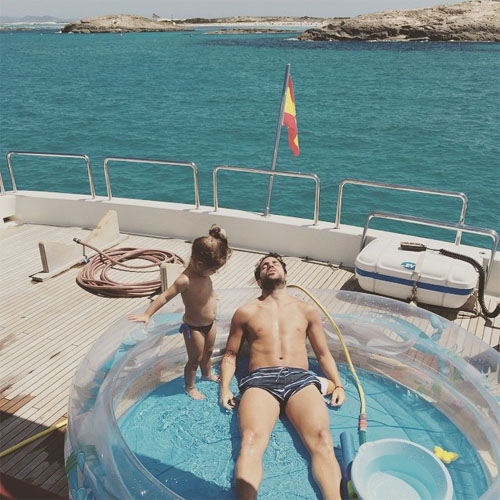 Cesc Fabregas is clearly loving life on holiday with his daughter Lia ahead of becoming a father for the second time.

The Chelsea midfielder has enjoyed a special year since he made his return to the Premier League from La Liga giants Barcelona last summer.

Fabregas won his first Premier League title and the League Cup last term, whilst in his private life, his partner Daniella became pregnant for the second time.

And the 28-year-old playmaker treated himself to a dip with his daughter in their paddling pool on a boat on holiday on Friday.

Fabregas won the Premier League and League Cup in his first season back in the English top-flight and he made a staggering 18 assists for his team-mates over the course of the campaign.

The Spain international completed a controversial £27m move to Chelsea from Barcelona last July despite having previously captained for their London rivals Arsenal.