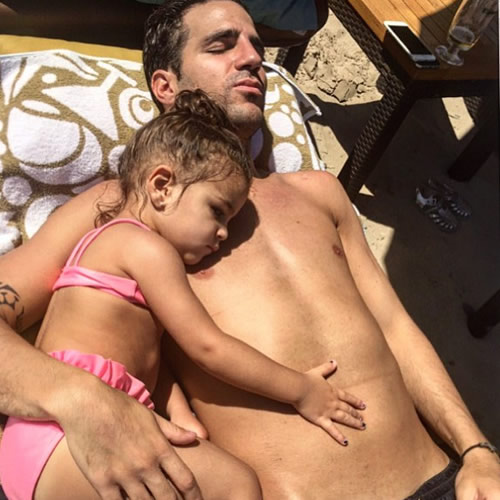 Cesc Fabregas looked completely relaxed as he enjoyed a well-earned break in the sun following a gruelling Premier League season.

The Chelsea midfielder soaked up some rays with his daughter Lia on a sun lounger as he began to unwind following the end of the 2014-15 campaign.

Fabregas shared the picture above on his Instagram account and wrote: “What else can i ask for? #onholidaywithmylittleprincess #cantwaitforprincessnumbertwo”

The 28-year-old midfielder played 75 minutes as Spain beat Belarus 1-0 in Sunday’s Euro 2016 qualifier – his final match of the campaign.

Fabregas established himself as an integral part of Jose Mourinho’s first-team at Stamford Bridge last term, with his impressive form helping the Blues to win a League Cup and Premier League double in his first campaign at the club.

He scored three goals and made 18 assists in 34 games to help Jose Mourinho’s men win their fourth Premier League title.