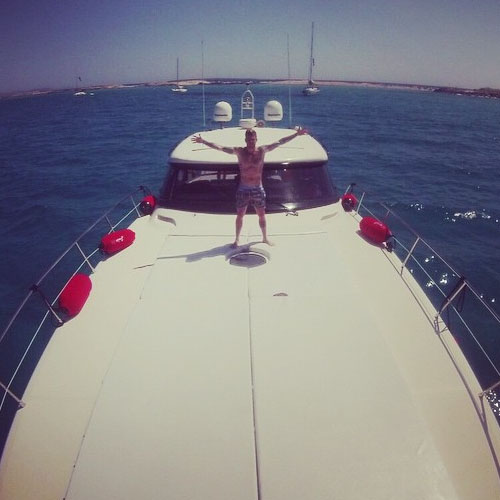 Alberto Moreno is lapping up every last drop of sunshine as the Liverpool defender posted for a photo on an impressive boat on Saturday evening.

The 22-year-old doesn’t have appeared to have left the boat on too many occasions over the past few days during his summer holiday in Ibiza.

The Reds full-back Moreno is putting his feet up after completing his first season in the Premier League following his move from Sevilla last summer.

And Moreno attempted to show off the size of his vessel in a snap which the Spain international uploaded on his Instagram page.

Moreno has spent a lot of time with Liverpool team-mates Javier Manquillo and Jose Enrique during his holiday in Ibiza.

The Liverpool star scored two goals in 41 appearances in all competitions for Brendan Rodgers’ side this season, establishing himself as the club’s first-choice left-back.

The Spanish defender, who has made three appearances for La Roja since making his debut in 2013, also played in seven games in the Champions League and Europa League throughout the 2014/15 campiagn.

Photo: Chelsea star posts seflie with his wife ahead of holiday