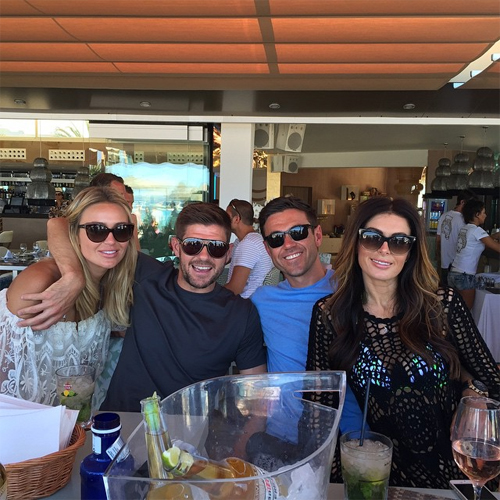 Steven Gerrard has taken to Instagram to silence all his haters.

The Liverpool legend has been subjected to ample abuse at football stadiums up and down the country this year after his infamous slip against Chelsea contributed to Liverpool’s title collapse in April 2014.

Gerrard has suffered similar stick on photo-sharing app Instagram after the former Liverpool captain joined up before last summer’s World Cup in Brazil.

And the Reds legend dedicated a special post to all his haters on Saturday afternoon as he relaxed with his wife Alex and some friends in Ibiza.

Gerrard posted the above snap and wrote on Instagram: “Haters do one #lovelytime”

The former England international was in a prickly mood towards the end of the season after a 1-1 draw at Stamford Bridge.

While the Liverpool man was given a standing ovation upon his substitution in the final 12 minutes, Gerrard had been relentlessly reminded about his slip throughout the game.

And the England centurion had his own dig at the Chelsea haters in his post-match interview with Sky Sports.

The Reds legend called time on his Liverpool career at the end of the season ahead of his move to MLS outfit LA Galaxy.