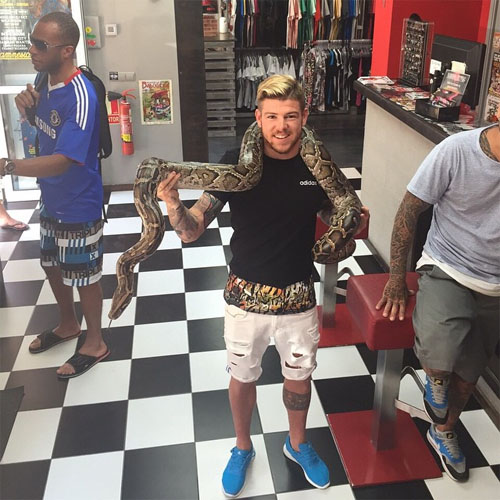 Alberto Moreno came up against some slippery customers in the Premier League this season, perhaps no more so than Chelsea star Eden Hazard.

So the Liverpool defender was getting in some early pre-season training during his holiday in Ibiza as the Spain international trained with his new friend.

We’re no snake experts but the 22-year-old’s new slippery friend looks like a python, although Moreno looked unfazed by the lengthy animal.

Moreno posted: “Here in Ibiza with my friend bossatattoos”

Funnily, some of Moreno’s Instagram followers urged the full-back to place the snake on the Chelsea fan in the background of his photo.

Whilst others, suggested Moreno nickname the snake Raheem Sterling amid the continued uncertainty surrounding the England man’s Anfield future.

The Liverpool star scored two goals in 41 appearances in all competitions for Brendan Rodgers’ side this season, establishing himself as the club’s first-choice left-back.

The Spanish defender, who has made three appearances for La Roja since making his debut in 2013, also played in seven games in the Champions League and Europa League throughout the 2014/15 campiagn.