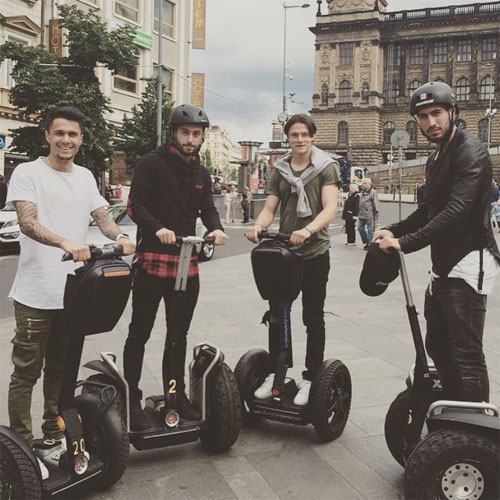 Emre Can and his Germany Under-21 pals Photo: Emre Can/Instagram

Brendan Rodgers and the Liverpool medical team may want a word with Emre Can when the Reds midfielder returns for pre-season.

The 21-year-old is currently on international duty with Germany’s Under-21 side at the European champions in Czech Republic.

Can has been one of his country’s standout performers so far after having scored one goal and made one assist in two tournament appearances so far.

And the Liverpool midfielder joined team-mates Leonardo Bittencourt, Nico Schulz and Yunus Malli on a segway tour around Prague on Sunday.

The 21-year-old ended his first Premier League campaign with a whimper after he produced a disastrous performance in Liverpool’s resounding 6-1 defeat by Stoke City at Britannia Stadium on the final day of the season.

However, the German youngster was one of Rodgers’s better signings from last summer after he helped to improve the Liverpool defence midway through the campaign.

Can has scored one goal in 24 Premier League appearances for Liverpool after he moved to the Reds from Bundesliga outfit Bayer Leverkusen last summer.

Photo: Jose Enrique hangs out with one of Liverpool’s worst signings