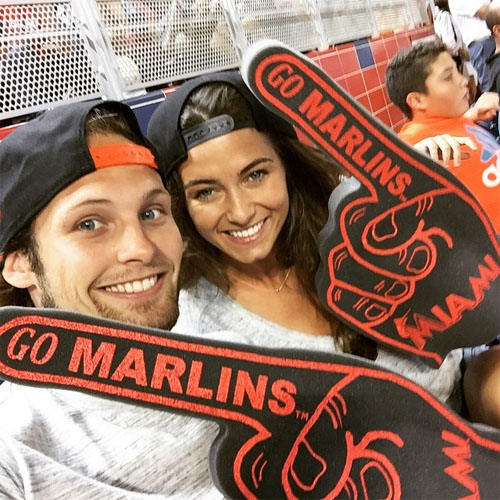 Daley Blind was embracing the baseball spirit on Friday night as the Manchester United midfielder joined his girlfriend for a Miami Marlins game.

The 25-year-old midfielder is one of the biggest names in the Premier League after an impressive first season at Old Trafford following his £16m move to United from Ajax last summer.

The Netherlands international, who was voted Dutch football of the year in 2014, is currently enjoying a well-earned break state-side after a long and demanding campaign for club and country.

And United midfielder Blind treated his long-term girlfriend Candy Rae Fleur to a trip to Marlin Park for the game between Miami Marlins and LA Dodgers on Friday night.

Blind posted the above snap and wrote on Instagram: “Go Miami Marlins! #MiamiMarlins”

Blind was a key part of Van Gaal’s United side following his summer transfer to Old Trafford from Ajax last year.

Photo: Man United defender poses for a snap with his girlfriend at Colca Canyon