Queen’s 2015: Andy Murray ‘in a good place’ after beating Muller to reach semis 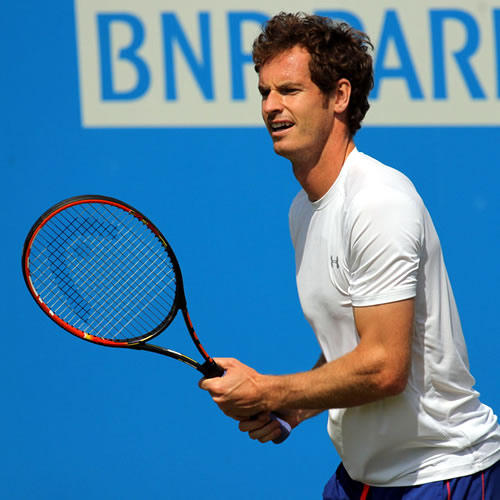 Andy Murray is through to the semi-finals at Queen's Club Photo: Marianne Bevis

It may not have been quite the line-up that the seedings predicted at the start of the Aegon Championships. Just three seeds would contest a place in the semi-finals, including No7 Gilles Simon and No3 Milos Raonic. The third, though, was the favourite from day one, three-time champion Andy Murray.

Favourite, in part, because of the surface—he trails only Roger Federer in winning percentage on grass—but favourite too because he is the best thing to happen to tennis in this country since—well, it would have to be the oft-mentioned Fred Perry.

It helped Murray’s London cause that he has been enjoying some of his best form since his Wimbledon-winning summer in 2013, a summer in which he was forced out of the Rome Masters and French Open with persistent back problems that would, after the US Open, force him to undergo back surgery.

Not that 2014 was a poor year: 59 match-wins, three titles—part of an intense run at the end of the season to seal qualification for the World Tour Finals—and the quarter at all the Grand Slams, advancing to the semis at Roland Garros.

But this year, the trajectory has been a near-constant rise, from No6 before he reached the final at the Australian Open to No3 now, via another final in Miami semi runs in Indian Wells and Paris, and titles at the Madrid Masters and Munich.

He reflected before his Queen’s campaign on the journey back to form.

“Last year was definitely a very difficult year. The first six months were especially hard, coming off the surgery I found difficult. I maybe didn’t expect it to be that hard whereas this year from the beginning I’ve felt ready to win Major competitions again.

“It’s been huge, huge progress from where I was at this stage last year. I’ve played extremely well so far this year… and grass courts I think suit my game better than the clay, and if I can take some of the form from the clay over on the grass and some of the confidence, I’m sure I can have some good results.”

His second-round defeat of a man who had pushed him so hard at Wimbledon in 2013, Fernando Verdasco, in straight sets, reinforced that confidence.

“I thought it was fine. I mean, it wasn’t perfect, but I felt like I dug myself out of a few difficult situations when I was behind on my serve… I raised my game or [perhaps] my intensity at the end of the sets, felt I played a little bit better when I needed to. But I will definitely need to make sure I start a bit sharper than I have in the last couple of matches, because I played a couple of sloppy service games early on. When you start playing against the big servers, you can’t really afford that.”

Which brings us to one of those unseeded men, Gilles Muller, who Murray knows via Muller’s coach, his old friend Jamie Delgado. Indeed Murray warmed-up with Muller ahead of the Verdasco match, because the big man from Luxembourg has an even more powerful left-handed game than the Spaniard.

Muller, too, was putting together one of his best ever seasons due, he said after beating defending champion Grigor Dimitrov, to his intense work while he was away from tennis with an elbow injury in 2013. He now stood close to a career-high, and at Queen’s, he was close to the top of the aces leader-board with 56… 37 of them in a tight three-setter against Mikhail Youzhny in the first round.

So could Murray contain that Muller serve? Well not in the first set.

Muller opened with a love hold and broke Murray in the fourth game. Muller’s serving held off two break-back points in the fifth game, and Murray avoided another break in the sixth. But he could not make significant inroads on the Muller serve and after 32 minutes was a set the poorer, 6-3, courtesy of a huge forehand winner from the Luxembourg man.

Murray may have dropped only two points on his first serve, but Muller had dropped only one in 18. Murray, though, responded in the best possible way.

In the second set, neither man had a break-point chance as they edged inevitably to a tie-break. But Murray’s serving was even more rock solid than Muller’s: He dropped just three of 29 first-serve points, and so good was it that he played only four second serves, winning two of them.

And that was the big difference: Muller’s first serve was top notch but he won only three out of 12 second serves, and Murray’s returning during the tie-break tore open Muller’s serve for the set: 7-6(2).

It felt as though there had been a sea-change, and so it proved. Murray broke straight away in the third set with a cracking return-of-serve winner. Muller fended off three more break points in the third game, and another in the seventh, but Murray now had the bit between his teeth and, just minutes short of two hours, he had the win, 6-4. Again, just three points lost on serve: an impressive performance.

Murray talked afterwards of the small margins that made the difference: “It’s always tough when you’re behind and I wasn’t getting many chances on his serve. It was a bit frustrating. I started to read the serve a little bit better in that tiebreak and the end of the second set. That’s when the match changed a little bit.

“Definitely towards the end I started to relax more and return better and played some really good tennis. Hopefully I can carry that form into tomorrow.”

Of his possible next opponent, two of those unseeded men, big servers both, who were still contesting their spot against Murray, he said: “John [Isner] obviously has a fantastic serve and is a huge guy, similar in some ways to playing Muller. [Viktor] Troicki has played very well on the grass so far. He played in the final in Stuttgart last week and then had a couple of good wins here. It will be a tricky match.”

Murray concluded: “I’m in a good place just now. Physically I feel good. Obviously with Wimbledon around the corner, it’s always good to pick up some wins. Looking forward to the next few days.”

And that will be music to those home fans’ ears, especially as the last time Murray won here, he went on to win Wimbledon too.