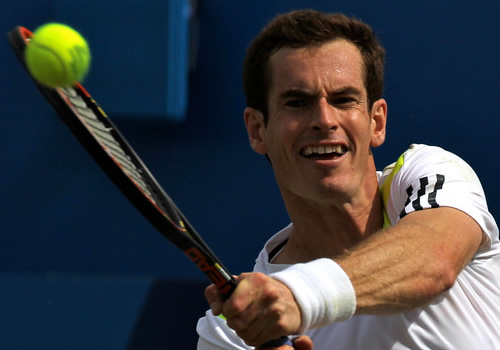 Andy Murray is gearing up for the Aegon Championships at Queen's Club Photo: Marianne Bevis

Only two men currently on the tennis tour have managed to break the grass ceiling when it comes to ranking the most successful Open era players.

The first will surprise nobody. Roger Federer, with 14 grass titles and a 131-19 match-winning record, tops the ATP Performance Zone—higher than Pete Sampras, higher than Lleyton Hewitt, higher than Bjorn Borg, all of whom have been multiple grass champions.

Seven Wimbledon and seven Halle titles certainly don’t lie, especially put alongside two more finals at each of those events. In a grass season that has, until this year, spanned only three weeks, Federer has shown a greater affinity for the slick, demanding, fast turf than anyone else.

But appropriately enough, in the home of the oldest and most prestigious Grand Slam, it happens to be a Briton who makes the only other appearance in the Open era’s top 30: Andy Murray. He has won five titles and 78 matches on grass, including Wimbledon 2013, Olympic gold in 2012, and three at Queen’s.

Indeed at Wimbledon, Murray has never fallen short of the third round, which he achieved as an 18-year-old, in his first year on the pro tour in 2005, and has fallen short of the quarters only once more—a fourth-round loss in 2006. That’s 41-8 – some record for a player who grew up on Scotland’s indoor courts before moving to Barcelona’s clay at 15.

At Queen’s, in fairness, Murray has found his Wimbledon consistency harder to come by: Twice he has lost in the first round, twice in the second. But when he’s good, he’s very, very good, as he has been three times. So he had every reason to sound upbeat about his chances this year when he faced the media after his first practice session in Kensington. And that is aside from arriving in London after the most successful clay season of his career, beating Rafael Nadal to win the Madrid Masters and taking Novak Djokovic to five sets in the Roland Garros semis.

“Last year was definitely a very difficult year. The first six months were especially hard. Coming off the surgery I found difficult. I maybe didn’t expect it to be that hard whereas this year from the beginning I’ve felt ready to win Major competitions again.”

He was the losing finalist at the Australian Open and Miami, again coming up short against Djokovic, and so boasts a 36-6 season to date.

“It’s been huge, huge progress from where I was at this stage last year. I’ve played extremely well so far this year, so I have to be happy about that. And grass courts I think suit my game better than the clay, and if I can take some of the form from the clay over onto the grass and some of the that confidence, I’m sure I can have some good results.”

There is no doubt he has an air of contentment about him, a contentment bolstered not just by marriage during the spring but also by the successful evolution of his coaching partnership with Amelie Mauresmo, who he recruited just over a year ago.

Mauresmo is expecting her first child later this summer, and Murray has supplemented his team with veteran Swede Jonas Bjorkman, himself a Wimbledon semi-finalist in 2006 and a prolific doubles champion at the All England Club.

“Obviously I like having [Amelie] around… [and] we know each other a lot better than we did this time last year.

“It’s been for me a very good start to the year, and I think it’s good, before she’s away for a few months from the team, that she and Jonas can spend some time together as well. During Wimbledon she can take the lead and Jonas can see how we operate a bit more as a team.”

Not surprisingly, considering how comfortable the Briton is on home turf, he has welcomed the extra week in the grass season with open arms, though he has opted to use the time between the French Open and Queen’s for rest and recuperation, and to ease himself into the different style of play that grass demands, rather than squeezing in an extra event.

But he went further.

“I think it should still be longer. I think there should be more grass tennis. I think there should be a Masters on the grass, but it’s a good start, and definitely is healthy for the tour and all the players. Because you see guys slipping and falling over… For three months in the build-up to grass, you are moving in a completely different way, so to expect guys to just be able to change their movement patterns in a matter of days is very hard, so at least there’s a bit more time to adjust.”

He hinted, too, that he could see no reason why Queen’s should not be a candidate if the tour does decide to add a Masters event to the grass schedule.

“When you look at the field of this event, it deserves recognition as being one of the leading smaller events on the tour.”

And no-one can argue with the quality of the 32-man line up. The eight seeds alone contain four Grand Slam champions, three of whom have won Queen’s: Murray, Nadal, Marin Cilic—a possible semi-final opponent for Murray—and Stan Wawrinka.

There are other Queen’s winners, too, in the shape of defending champion Grigor Dimitrov and 2010 champion Sam Querrey, who face off in the first round and could meet Murray in the quarters.

Multiple Queen’s champion Hewitt is in Wawrinka’s quarter, but the Swiss has the dangerous Nick Kyrgios in the first round: the charismatic Australian reached the quarters at Wimbledon in his first appearance there last year.

Add in unseeded Viktor Troicki, who takes on Nadal in the Stuttgart final this weekend, and David Goffin, finalist in ‘s-Hertogenbosch, and there is strength in depth throughout the draw.

Murray made sure to end things on a down-beat note: He may feel confident about his form but he is making no guarantees about his Queen’s or even Wimbledon success: “Just because I’m playing well, it doesn’t mean I’m going to play well in a few weeks, and if I play really bad here, it doesn’t mean I can’t have a bad Wimbledon.”

On the evidence thus far—especially on grass, and particularly this year—he still remains one of the favourites to make an impression during the all-too-short summer of grass.