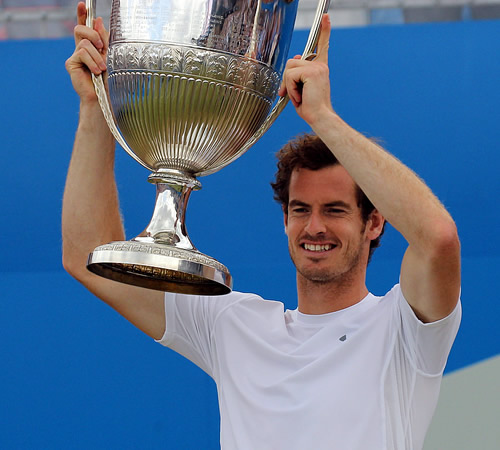 It was the toughest of assignments for Andy Murray.

Three-time champion he may be on London’s finest grass, and he may have the full weight of the home crowd behind him, but he faced the tall, powerful Kevin Anderson, who had proven himself the better of four-time former champion Lleyton Hewitt, French Open champion Stan Wawrinka, and the No7 seed, one of the best returners in the world, Gilles Simon.

Anderson had notched up a personal record number of aces in his semi-final and stood just four short of 100 for the tournament. But perhaps the biggest factor was that Anderson had sealed his place in the final by late afternoon on Saturday, and would then watch Murray’s semi halted by rain just 30 minutes into the first set. The Briton would still be earning his place in the final against Viktor Troicki until two hours before taking to court again for the title bout.

But Anderson had no doubts that the super-fit, super-confident Murray would not find it a problem.

“I think it happened to him recently in Munich. I think he had to come back and play the semis and finals on the same day… He’s proved himself time and time again to be one of the best players in the last decade. The way he moves, the way he returns, especially on the grass, he’s put up some amazing results. I played him a few times, beat him the once, but he has gotten the better of me quite a few times.”

Six times in fact, and only once had Anderson taken Murray beyond straight sets.

And Anderson was right about Murray’s iron-man achievements in Munich: A final begun on Sunday was completed the next morning, and that was after he played two singles and a doubles match on the Saturday after Friday’s schedule was also washed out.

Murray even went on to win the Madrid Masters the next week, beating Rafael Nadal in the final, and reached the semis at Roland Garros… another match played over two days, but this time a loss to Novak Djokovic.

So Murray had no concerns on either the stamina or form front and that was very quickly borne out when he took to the court. It would take him only 64 minutes and cost him only seven games against one of the best servers on the tour to surge to victory.

He took the first game with ease, but Anderson also began with intent, winning a serve and volley play to open and taking to the net again to hold. But Murray was in blistering form, putting into practice the aggressive game he has aimed for this season. He broke in the fourth game, threw in a drop-shot winner and a forehand cross-court stunner to go 4-1, made a love hold for 5-2, and dropped just one point in serving out the set, 6-4.

It had taken less than half an hour, and it was not as though Anderson was serving poorly, nor lacking attack. He dropped only two points on his first serve in the first set, three more in the second—and he was serving at well over 70 percent, but Murray was not just attacking vigorously but defending like a demon. He offered not a break point in either set, and at the very sniff of a break against Anderson, he seemed to up his level still further.

His chance in the second set came in the fifth game: first a return-of-serve forehand down the line, then the cruelest of plays—repeated time and again—a drop shot followed by a lob. Anderson chased the former but could not get to the latter and that brought the break, though the men were level on 17 points apiece in the set, and level at 80 percent on first serve percentage

But Murray’s tactical timing was perfect. Another drop shot and lob combo opened the eighth game, a backhand winner closed it for 5-3, and yet even with such a lead, he continued to gee himself up on every lost point.

Not that he lost many more points—and he served out this most impressive victory with a remarkable kick-serve winner.

It marks not just Murray’s 34th title from his 50th final, but a fourth lifting of the biggest and most elegant trophy in the business. And that puts Murray into exclusive company: the only other men to win four at this prestigious club are multiple Grand Slam champions all, John McEnroe, Boris Becker, Lleyton Hewitt and Andy Roddick.

Naturally, it did not take long to point out to him that the last time he won here he also went on win Wimbledon, and he was asked if he felt in similar form this year—and given that he was wrestling with back problem in the spring and summer of 2013, his reply was perhaps not surprising.

“I’m playing better than then, I feel. But you know, it’s extremely difficult to win these events. Everyone is improving all the time. You’re playing against some of the greatest players that have ever played, so you need to keep working hard and trying to get better. I feel there are still things I can improve on and learn from. I will keep trying to do my best and hopefully play like that more often.”

It was also later pointed out that he had been halted by one particular player at key points through his impressive season, the man with whom he now stood on level terms at 41 match-wins: Djokovic. The world No1 beat him in the Australian Open final, the Miami final, and the semis of both Roland Garros and Indian Wells.

He took that as a positive, and added: “There is no disgrace in losing to him, but obviously if I want to win the Major competitions—I have beaten him in those tournaments before when I won US Open and Wimbledon and the Olympics—I need to continue to improve and learn from those matches. I also look at him and the things he’s doing well and try to improve upon my own weaknesses.

“But I can’t complain about the way I played the last few months. There is one player in the world that’s played better than me. I would like to be that player, but hopefully in the future I can be.”

“It was a subtle hint that he feels he is hot on Djokovic’s heels. And with so many points to defend in the coming months, perhaps even the No1 ranking beckons for the man who is already Britain’s favourite son.