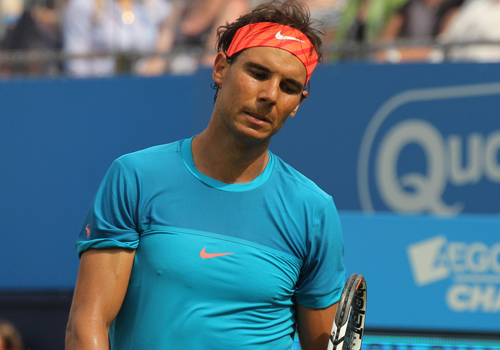 It was hard to decide, ahead of the campaign of 2008 Queen’s champion Rafael Nadal, which way things would go for the Spaniard as he took on the tricky, unpredictable talent of Alexandr Dolgopolov.

Nadal arrived, after a three-year absence from the tournament, fresh from winning his fourth grass title in Stuttgart, his first since winning Wimbledon in 2010. It was just his second title of the year, both of them 250s.

And before Stuttgart, he had suffered just his second ever defeat at Roland Garros in the quarter-finals after a clay season far from his usual winning standard. But perhaps it was not surprising after a 2014 marred by wrist, back and appendix problems that saw him play hardly a match after his fourth-round Wimbledon loss last summer.

Now at his lowest ranking in a decade, at No10, Nadal rightly remained reserved about his chances not just on grass this summer but through the rest of the year.

“I didn’t play well enough before. The first three and a half months of the season have been terrible for me, very bad, playing very bad almost every week.

“I was not happy to lose in quarter-finals [of Roland Garros], but at the same time I needed to accept that there was another player who was playing better than me in that moment. And for me, life continues and career continues. My goal is qualify for the World Tour Finals and to finish the season healthy.”

He, also rightly, affirmed that things could only get better, since he has negligible points to defend for the rest of the year.

“I’m going to have a much better second half of the season [than] the first. My mentality is good. [I’ve been doing] very good work on grass… Since one month and a half, I feel that I am playing better. The most important thing is that I am enjoying being on court again.”

However, he had looked tired after some long matches in Stuttgart, and pulled out of the doubles there, citing fatigue. And he opened slowly here, getting broken straight away to trail 0-3. He could not make up the break, never even worked a break point, and in just over half an hour was a set down, 6-3.

Dolgopolov was weaving his magic, a mix of power, unorthodox slice and spin, leaps and bounds. The crowd was desperate for Nadal to stay, shouting their encouragement, but the Spaniard fell behind in the second-set tie-break and faced match-point at 6-5 down. But as is so often the case, he came up with some great forehands just when he needed them, saw his opponent hit long, and reeled off three straight points for the set.

When Nadal broke in the third set, with his first break point of the match, and held serve to lead 4-2, it looked like the old familiar story. He had the bit between his teeth, it seemed, but instead there were echoes of the Nadal of last few months. A poor game in the eighth, not helped by a time violation, and he was broken back.

Dolgopolov, so often the wayward player in such a scenario, survived break threats to hold, and then played some remarkable points to punish too many second serves from Nadal at 4-5. First a pass off a Nadal drop shot, then Dolgopolov hit a backhand return-of-serve winner for match point. A forehand winner down the line and the job was done, 6-4.

Nadal afterwards pointed to his own inability to convert his chances as well as Dolgopolov’s awkward style of play.

“Nothing to say against me. I played against uncomfortable player in the first round and I had my chance. I didn’t play a bad match, but matches sometimes here decide in just a few things, and I was not lucky enough today. I probably didn’t play aggressive enough when I had the break up in the 4 3.

“But at the end, no, he played well and he was a little bit better than me. I cannot say I am very sad the way that I played… My feelings, my thoughts are no different today than yesterday. I am better, I am playing better than before, and enjoying more on court than before.”

He admitted that, after his doubles commitments here—he plays with Marc Lopez later this evening—he will return home for a few days of rest, and then return to prepare for Wimbledon. Perhaps it’s a sign that fatigue did play a part… the next fortnight will surely tell us more.

Dolgopolov goes on to meet the in-form Guillermo Garcia-Lopez, who will play for the chance of Stan Wawrinka or Kevin Anderson in the quarters.

Also in the bottom half of the draw, the section headed by No3 seed Milos Raonic, teenage Thanasi Kokkinakis set up a second-round meeting with Gilles Simon.

Queen’s 2015: Relaxed Wawrinka ‘feeling quite good’ as he races by Kyrgios