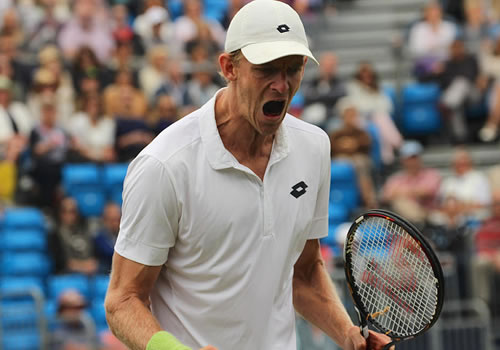 One statistic was soon rebounding around Queen’s Club on the last day of second-round matches at the Aegon Championships.

In the match between No8 seed Feliciano Lopez and the unseeded John Isner, a 2hr 20min three-tie-break thriller with not a break of serve in sight, the pair notched up a record number of aces.

But these two big men have not been the only ones making service waves on the grass of Queen’s this week.

After playing two matches apiece, Isner is top of the list with 57, but a close second is the left-handed powerhouse from Luxembourg, Gilles Muller, who hit 37 aces past Mikhail Youzhny in his opener and reached an overall total of 56 with his quicker dismissal of Grigor Dimitrov.

Milos Raonic may be making his first return to competition since he left Madrid to have foot surgery, and he may be playing at Queen’s for the first time, but he has soon been back into the swing of things with 53 aces.

Lopez cannot now improve on his 46, though Kevin Anderson did increase his 44—adding another 18 in his two-tie-break quarter-final against Spaniard Guillermo Garcia-Lopez.

Beneath that aces statistic, though was a story of outstanding serving that was not entirely dependent on aces. Garcia-Lopez only hit six, but he also hit a far higher number of winning serves that Anderson could barely get reach. He dropped only eight points on serve in the first set, and did not drop a point in his first three service games in the second set. The only break point he faced in the match was serving at 5-6, and it happened to be match point: It resulted in one of the few long rallies in the match and it went to Anderson.

He afterwards talked about the quality of their serving: “It was definitely dominated by serves today. I thought he served incredibly well, especially in the second. There were a couple of games where I wasn’t really getting any returns in even. I thought I played a very good return game at 6 5, made a couple of good returns, was aggressive throughout. Step 1 was take care of my serve, which I was able to do, and try and create any opportunities on his serve games. Fortunately, I was able to get one right before the end. If not, we would have been in another tiebreaker!”

Andy Murray was asked about the surging number of aces in this tournament, and put it down, in part, to the dry conditions here this year. 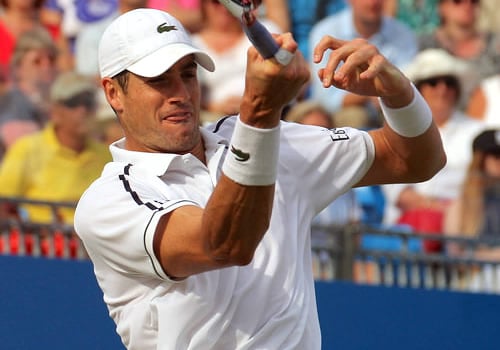 “I think that normally at the end of the tournament like Saturday/Sunday, it starts to get quicker as we play on and there are more matches.

“I was speaking to the groundsmen, and normally at the start of the tournament here, you see a lot of guys slipping the first couple of days. The court is very lush. That’s not the case at all. It’s a lot drier this year, and therefore I think the court is harder and playing a bit quicker from the beginning of the tournament.”

Whether it is the playing surface—and slick grass tends to produce the best serving performances—or that players are better prepared having had the chance of an extra grass event before Queen’s—there is no getting away from the fact that records are made to be broken.

And before Isner could enjoy his own record for too long, and before he took to court against another big serving quarter-finalist, Viktor Troicki (32 aces and counting), his limelight would be stolen by the 36-year-old, 6ft 11in Ivo Karlovic, in Halle.

“I’m extremely happy about the record. I was surprised when I was told after the match how many aces I hit. I didn’t know it was that many. Hopefully I can continue like that in the semi-final.”

There he could meet seven-time champion Roger Federer, no slouch in the serving department himself, though not from height and power but rather from disguise, variety and spin.

However Anderson, now up to 62 at Queen’s this week, picked Karlovic as the best server on the tour, with Isner edging it for the second serve.

Rain is threatened for Queen’s tomorrow—perhaps that will dampen the ace count—but before that Raonic was closing in on 20 as his match against Gilles Simon went to a third set, Muller was still to come, and Isner would close the day’s proceedings.

Queen’s 2015: Andy Murray ‘in a good place’ after beating Muller to reach semis