The Aegon Championships will be quality from start to finish, and so the seeds face some big tests right from the off 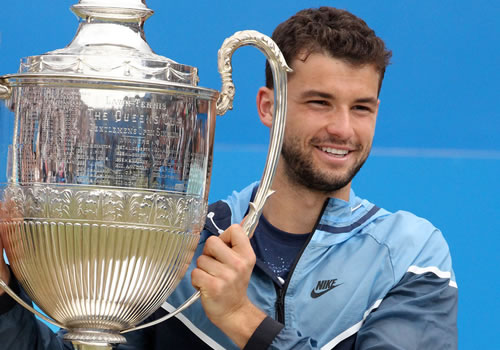 It’s a big year for the Aegon Championships, which gets under way on Monday at the famous Queen’s Club in the heart of Kensington.

Famous for having, in the view of many—including former champion Andy Roddick—the best grass courts in the world.

Famous for drawing the cream of the crop to its lawns for the pre-eminent Wimbledon warm-up tournament: the draw this year boasts Andy Murray, Rafael Nadal, Marin Cilic, Stan Wawrinka and, in his farewell season, Lleyton Hewitt—Grand Slam champions all.

Famous for its history, with the first championships held here in 1890 and the likes of Bill Tilden, Don Budge, Rod Laver, Jimmy Connors, Pete Sampras and, of course, Murray three times, on its honours board.

Famous, too, for being voted the players’ favourite 250 tournament for the last two years in a row.

But this year, there are changes, and for the better. Along with its sister grass tournament in Halle, the Aegon Championships have been upgraded to 500 status, and its prize money and points have grown too.

The huge 56-man draw has been reduced to 32 to ensure the eight seeds can all play their matches during the first two days of competition. There are no byes in the first round, and only four qualifiers will make the cut from just two rounds of qualifying competition.

So the Aegon Championships will be quality from start to finish, and that means the seeds face some big challenges right from the off.

At the bottom of the draw, French Open champion and semi-finalist here last year Wawrinka pulled the charismatic and fast-rising No25 Nick Kyrgios in his opener.

Four-time champion Hewitt, in his last appearance at Queen’s, has the unenviable prospect of No17 Kevin Anderson, with the winner taking on Wawrinka or Kyrgios. And the winner’s possible quarter-final opponent? Nadal—though he too has a tricky opener against the unpredictable Alexandr Dolgopolov.

Other stand-out first-round matches are No7 seed Gilles Simon against a man who missed a seeding by one spot, David Goffin, who arrives at a career-high No15 in the rankings. The winner could meet another star in the making, teenage Thanasi Kokkinakis, and then Richard Gasquet or No3 seed Milos Raonic.

But what of defending champion Grigor Dimitrov, who won his first grass tournament here last year, went on to reach his first Wimbledon semi-final, and broke into the top eight soon after?

Grass has been the creative all-court, single-hander’s favourite surface since he won the Wimbledon junior title, and he went on to reach the second round at Queen’s with his first wild card in 2009. He has played here every year since, and clearly feels a special affinity with the place. It was written all over his beaming face as he did the honours at the draw ceremony.

“Every time I come on grass, I have a special feeling, a different connection. The way I move, the way a play, the decisions I make on court… I don’t know why I feel that way, it’s just a feeling that I have since I first stepped on grass.”

And winning his first grass title here last year, beating the then world No3 Wawrinka in the process, was the fulfilment of a junior dream.

“Last year was an unbelievable moment for me. One of the first things I did was ring my dad, and I remember coming out here with him when I got the first wild card, and I said, ‘I like that trophy a lot!’ Next thing you know, I had it in my hands.”

And the Queen’s trophy is something special: one of the biggest silver cups in any sport.

But to get his hands on it again he will have to rediscover some of that form from last year, for he has reached just one final since, in Stockholm, has an 18-11 win-loss this season, and arrives in London having lost in the second round of Rome and the first round of the French Open.

He has also drawn Queen’s 2010 champion in the first round, Sam Querrey, and is a likely quarter-final opponent for Murray.

I asked if coming back here a year after such a great grass swing last year added to the pressure to perform, or gave him extra motivation.

“A big part of being a player is to reach a certain level, and the next step is to really keep it out there and prove yourself better every time you compete.

“It’s the kind of pressure you want to have, to feel those little butterflies before you come on court. I like someone chasing, too. It shows what kind of character you are. Regardless what I do, though, I’m going to have a smile on my face and get on with it. As soon as I step on the grass, I automatically change my mentality of how I play and what to do. That’s one of the good qualities I think I have.”

Naturally, feeling so at home on the green stuff, he is all for upping its presence on the tour still further with a Masters event: “It would definitely add a little bit of spice: I support that idea.”

Win or lose, the 24-year-old Dimitrov charms not just with his personality but with the kind of tennis that recalls that former grass era, when success came from spin and footwork and net skill as much as from power and serving.

Queen’s has loved him since the tall, slender teenager sporting the bandana and backhand style of his idol Roger Federer first took to its Centre Court. And the fans here would probably like nothing better than to see him across the net from their home hero, Murray, come quarter-finals day.