Queen’s 2015: Relaxed Wawrinka ‘feeling quite good’ as he races by Kyrgios 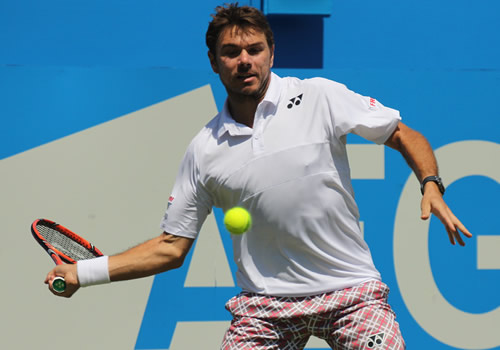 There are few grass courts to compare with those offered by the prestigious Queen’s Club.

There are even champions who will assert these are the best in the world: Just ask four-time champions Andy Roddick or Lleyton Hewitt.

The attention to detail is extraordinary: the grass is 7mm long; the mowing stripes are cut to fit precisely in between the white lines, exactly 24 of them between the two outer tramlines; and all the courts are cut, rolled and marked every day.

And on this second full day of main-draw competition in the heart of up-market Kensington, the Centre Court here will be tested to the absolute limit.

Tested by the feet of no fewer than five full matches plus the concluding set of one from last night. And tested by the demands of some of the best and most discerning tennis players in the world: Four top-10 players, four former Queen’s champions, three Grand Slam champions, two Wimbledon champions.

It was a day on which even the most expensive ticket was worth every single penny. Most home support would be looking down the schedule to three-time champion Andy Murray, who has arrived here in fine form and full of confidence. He is one of the tour’s best performers on grass—second only to Roger Federer among active players according to the ATP’s Performance Index. And since he had the good fortune to be drawn against the 31-year-old qualifier Yen-Hsun Lu, ranked 63 in the world, the Briton was expected to make relatively trouble-free progress to the second round

Of more immediate interest, perhaps, were the two matches that preceded Murray’s.

French Open champion Stan Wawrinka, buoyant from surging victories over Federer and Novak Djokovic in Paris, took time out at home with his family before coming to London to acclimatise to the grass. He professes to find the grass his toughest surface, and with a Major on each of hard and clay courts in the last 18 months, he may be right. But his power game, his remarkably flexible and varied backhand, and his big serving suggest grass can’t be far behind. In particular, he reached the semis here at Queen’s last year for the first time, and followed it up with his first quarter-final run at Wimbledon.

But he was wary of ‘bigging up’ his prospects in London. He had the misfortune to draw one of the fastest rising talents on the tour, Nick Kyrgios, in the first round.

He put it thus: “It’s a tough, tough first round. A big challenge. He loves to play on the grass. He has been practising and he’s ready for that. He played so well last year and he loves the big matches.”

Indeed: The big personality of Kyrgios matches his tennis. He raced to the quarters of Wimbledon last year, too, beating Nadal in the process—aged 19—and is now at 28 in the rankings. He has beaten Federer, too, on clay in Madrid, and won his first career title in Estoril in May.

If there was any uncertainty about what he might bring to Queen’s, it was that he pulled out of ‘s-Hertogenbosch last week with an elbow injury.

But in the event, it was not his elbow that proved the problem. It was a combination of dazzling play by Wawrinka and a clearly under-the-weather Kyrgios that saw the match come and go in the blink of an eye—well, 49 minutes. Both men play fast at the best of times, and the points were short due to some big serving off the rackets of both, but more especially Wawrinka: The Swiss dropped just two points in 30 first serves.

After some initial parrying for six games, Wawrinka looked at though he had been playing on grass for a month. He upped the tempo, opened his shoulders, and attacked the Kyrgios serve to break, closing out the set, 6-3.

And if that was quick, the second set was even faster. By the time Wawrinka had broken for a 3-1 lead, the match was only just over half an hour old. Kyrgios came close to breaking back, but with head hanging, the Australian looked as though he wished to be anywhere but here. Wawrinka served it out to love, 6-4, with an ace.

Kyrgios kept things short and sweet in press afterwards, admitting he had felt unwell for almost a week: “I just felt uncomfortable the whole time, really. Not feeling great. He’s obviously playing well. I mean, he hasn’t had much time on the grass but obviously winning the French Open, he’s comfortable. He hit the ball massive, free swinging out there.”

It’s untimely, of course, with just a week until Wimbledon, but he expected to shut himself away for a few days, switch off tennis entirely, and be ready for the big one: “I feel confident still. I know that I could do some good things there, and I know that I don’t necessarily need too many matches before Grand Slams.

“Australian Open, as well [where he also reached the quarter-finals], I had one match going in there. I just need to chill out for a couple of days, I guess. I’m pretty tired.”

The transformation of the 30-year-old Wawrinka from the slightly awkward, unassuming champion of 18 months ago, however, continues apace. Still quietly spoken, he nevertheless has the tone and body language of a man becoming entirely at ease with his status, his fame and, it has to be added, his popularity. The practice courts at Queen’s are noticeably more packed when he takes to court than in years past… and he is taking it in his stride with a quiet wit.

Asked about his opponent’s illness and plans to take time off, he countered: “I think he’s saying a lot of things every day, so it’s quite interesting for journalists to hear that (smiling)… When I read his interview, it’s always funny.

“When I read before the match he was ready, excited for the challenge, and now he was sick… I think it’s always interesting as a player to read what he’s saying and how his mind working.”

But what of his own form?

“It was good, really good start. I’m feeling quite good, for sure. Still need more time on the grass, more adjustment. Sometimes I’m not moving that well, but today it was a great match. I’m happy with the way I played for the first match on grass.”

He also revealed something of that new ‘ease’ he has as acquired.

“Australia, everything was new and I didn’t know what to expect. Everybody was saying it’s going to change your life and change your career. And that’s true, especially in an era that you have only the big four winning since 10 years. So I did a few mistakes after that. I had to learn and change the way I was and try to adapt myself to my new life.

“I think [the French] one is bigger in what I achieved. I’m enjoying more. I think I played better… but I’m controlling more what I’m doing, because I had the experience from the first one.”

It’s good to see this likeable man really enjoying his tennis—and the accolades. He has another demanding match against another big hitter, Kevin Anderson, to reach the quarters, but don’t put it past him, nor his making a significant run at Wimbledon.

Nadal, like Wawrinka, had a challenging opener against the unpredictable flair of Alexandr Dolgopolov, but he had the advantage of a title run in Stuttgart last week to draw on. He could, too, face Wawrinka come the quarters: And the Swiss won their last two meetings.

But Nadal would have a much harder time of his…