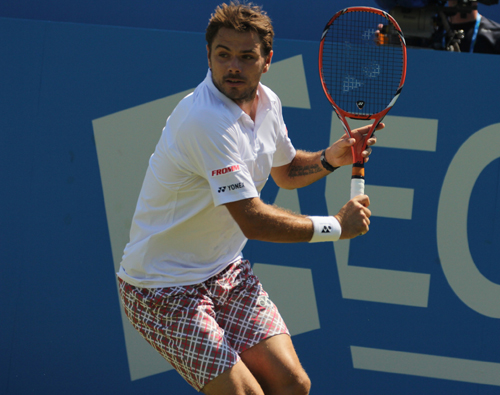 There is no question that Stan Wawrinka was the man of the moment coming onto the grass of Queen’s Club.

Newly up to No4 in the rankings after a storming run through Roland Garros to seal his second Grand Slam title, he had victories over Roger Federer and Novak Djokovic in Paris to boost his confidence. He also had victory over Rafael Nadal on Rome’s clay, and he took plenty of time to acclimatize to the grass by taking a few days’ holiday at home and then bypassing a warm-up tournament to come and train on Queen’s perfect grass.

Last year, he put together his best grass results in London, too: a semi run here and the quarters at Wimbledon, and this year he took out a young player expected to give him considerable problems, Nick Kyrgios.

Wawrinka hoped, then, to extend his unbeaten run to nine matches to earn a place in the quarter-finals this week, but the warning signs were there in the draw. For while Wawrinka had won his first three matches against the towering Kevin Anderson, ranked 17 in the world, he had gone on to lose the next three, all of them last year.

What’s more, Anderson had reached the quarters at Queen’s on his last two visits, but the two men had never met on grass. What they had done was contest five tie-breaks, and their last match was as close as could be, a 6-7, 7-5, 7-6 win to Anderson at the Paris Masters.

This match would continue the pattern in a contest that pitted big server against big server, and it was the 6ft 8in Anderson who won that battle, 22 aces to 11, with 72 per cent of his first serves hitting the mark and just 61 percent of Wawrinka’s. He also won the battle of the tie-breaks, twice.

Neither set yielded a break, though each had a fleeting chance, but come the tie-break, Anderson dominated proceedings to take it 7-6(4).

There was not much between them in the second set either, though Anderson’s serving steadily improved as he cranked up 14 aces and dropped only three points from 30 first serves.

Wawrinka fended off a couple of break points, but when it came to the tie-break, he was again on the back foot, going 2-4 down, and then 3-6 down as Anderson thrust home a serve-and-volley winner.

Now it was Wawrinka’s turn to produce some big serves and he saved the first two match points with great strikes. Now Anderson had the chance to serve it out, but failed. However an ace offered up a fourth match point.

Wawrinka put down two more serves to take the lead, Anderson hit two aces to retrieve it, Wawrinka returned the favour: 10-9 to the Swiss. He had the set on his racket at 11-10, only to smash a forehand way out—and that would prove fatal. He did not get another chance, and Anderson found a winning serve on his fifth match point.

As luck would have it, Anderson was the first man to beat Wawrinka after the Swiss man’s first Grand Slam victory: Last year, Anderson halted an unbroken run through Chennai, Melbourne, a Davis Cup tie and into the third round at Indian Wells.

The Swiss encountered the South African a little sooner this time, but the result was the same. The quietly-spoken Anderson recalled the statistic well:

“I guess that’s a funny coincidence. At this stage, I’ve just played these guys a lot of times, and I think it gives me confidence, knowing the guy I beat today just won the French Open and I watched him playing and beat the best players in the world doing it.

“Obviously it’s a different match, a different day, and different set of circumstances that you are always dealing with, but I think I can take just a lot of self belief. A lot of the things I have been working on came to fruition today.

“I felt I was serving really well. Grass definitely helps a little bit, especially on some of the wide serves. I definitely tried to come in quite a bit especially off my serves, trying to take away his block return a little bit. I just feel like I play good tennis against him. I can take a lot of confidence from that and take that same sort of belief against some of the other top guys.”

He can indeed. Anderson was a late-comer to the tour, and although he is 29 years old, he did not turn pro until 2007. He made his best run to Wimbledon last year, the fourth round, and playing like today, could do even better this year.

But for now, Anderson goes on to meet the winner between Alexandr Dolgopolov and Guillermo Garcia-Lopez in the hopes of reaching his first semi-final here. He is also in the doubles draw, as is Wawrinka with defending champion Grigor Dimitrov.

Elsewhere, in the bottom half of the draw, No7 seed Gilles Simon beat teenage wild card Thanasi Kokkinakis, 6-4, 6-2.

The top half plays for quarter-final places tomorrow, including Andy Murray, who went out of the doubles draw with Dom Inglot, falling to the top seeds, Alexander Pera and Bruno Soares, 6-4, 7-6(3).