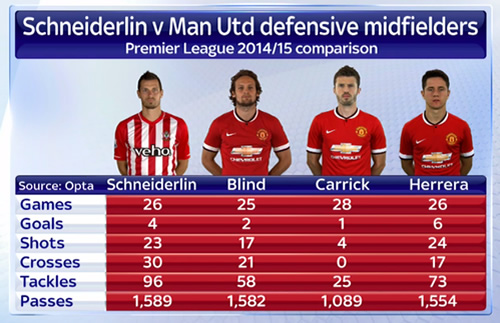 Manchester United have been heavily linked with a swoop for Morgan Schneiderlin in recent weeks as Louis van Gaal looks to bolster his midfield options at Old Trafford.

The Red Devils are thought to have edged ahead of Arsenal in the race for the France international’s signature as Van Gaal aims to transform his side into genuine Premier League title contenders next season.

Schneiderlin has been at Southampton since 2008 but looks likely to leave the south coast club ahead of the start of next season.

And the stats above clearly underline why Schneiderlin would be such a good addition to the United side, as he tops the Red Devils’ current midfield stars in most departments.

The Southampton star has netted a total of 15 goals in 260 games in all competitions for the south-coast club over the past seven seasons.