Lawns at The Boodles fine-tune Djokovic, Nadal, Raonic and more for Wimbledon 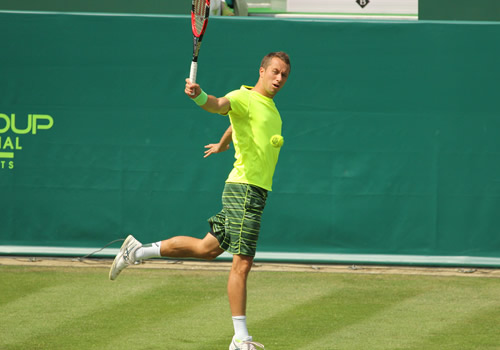 Philipp Kohlschreiber is among the players in action at The Boodles Photo: Marianne Bevis

The oh-so-sweet grass-court season may be a week longer this year, may have squeezed in an extra tournament to help the difficult transition from the red stuff to the green stuff, but the players still need to pack in as much court time as their bodies will handle.

They all talk of the stresses and strains of moving from high-bouncing, sliding actions to low-bending, nimble-footed movement, but that has not stopped the 33-year-old Roger Federer, the most prolific winner on grass in the Open era, winning an eighth title in Halle in his only outing between the French Open and Wimbledon.

It did not stop fellow 33-year-old Nicolas Mahut, ranked 97 at the time, winning in ‘s-Hertogenbosch.

It did not prevent the clay genius of Rafael Nadal heading straight from a disappointing quarter-final exit at Roland Garros to winning the Stuttgart title.

And it certainly did not seem to affect Andy Murray: He went from winning his first two clay titles back-to-back, taking Novak Djokovic to five tough sets in the French Open semis, to some practice at Wimbledon, to winning his fourth title at Queen’s—and thus notching up the most matches on the tour so far this year. 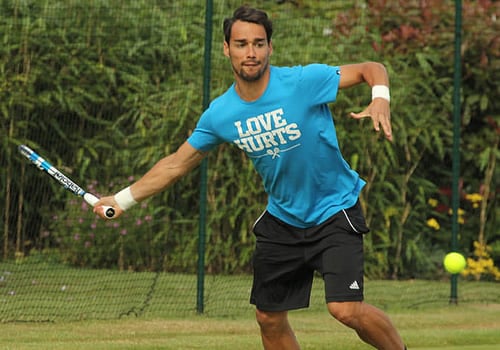 Fabio Fognini in action at The Boodles Photo: Marianne Bevis

No accident, perhaps, that three of those titlists are former Wimbledon champions, too, and that the fourth, Mahut, has won all three of his singles titles, and a good number of doubles ones, on grass.

This week, another set of grass hopefuls takes to the courts of Nottingham, including the last-but-one member of the top 10 to begin their Wimbledon preparation, world No7 David Ferrer. His relatively long time away from competition took its toll, a first-round loss, but then this is a swing that gives a chance to some different faces and grass-happy feet to shine.

Kevin Anderson reached his first ATP500 final at Queen’s; Ivo Karlovic broke the ace record on his way to reaching the semis in Halle; Viktor Troicki made two semis in a row in Stuttgart and London.

But what about the only top-10 man yet to put in an appearance, the Roland Garros runner-up and the defending Wimbledon champion, the world No1 Djokovic?

Well also squeezed into this packed and high-profile phase of the calendar is a handful of small gems that provides an alternative transition from clay to grass.

These are the warm-up, points-free, garden-party settings of venues that sit alongside The Season’s other June highlights of Royal Ascot and Henley Regatta. 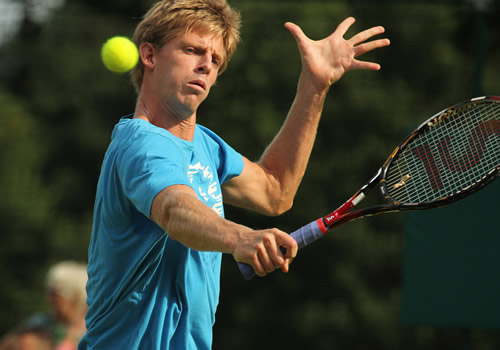 Kevin Anderson is gearing up for Wimbledon Photo: Marianne Bevis

And one of them in particular, The Boodles, has made a habit of attracting the mighty Serb on a regular basis—10 straight years.

Just as last year, this will be his only ‘competitive’ outing before the big one in SW19—and this extended rest combined with relatively light grass work-out has clearly reaped rewards: Not just Wimbledon champion last year but runner-up the year before.

Indeed Djokovic has excelled at The Championships since reaching the semis in 2007 at just turned 20: He has not falling short of the same stage since 2010, and it was on The Boodles Stoke Park lawns, perhaps the most picture-perfect setting in the English tennis scene, that Djokovic fine-tuned his grass game on his way to winning the title in 2011.

For while the mood is light in this exhibition-style round-robin event, the tennis is taxing enough to stretch the sinews and heart-rate—and the grass is pristine enough to test both footwork and timing. Little wonder so many players take in some of their Wimbledon preparation here.

This year, Nadal has also picked up the message, and is set to join The Boodles line-up for the first time in search of a bit more time on the turf after an unexpected first-round loss at Queen’s.

However, Djokovic and Nadal comprise just two of seven top-20 players to play Stoke Park. No8 Milos Raonic, who made his return from foot injury with a quarter-final run at Queen’s, will be here as last year—and last year, he went on to reach his first Grand Slam semi at Wimbledon.

Also here are two more tall, powerful men: No14 Anderson reached a career-high ranking with that Queen’s run; and No17 John Isner has already stretched his considerable legs in a match.

Add in men more renowned for their clay success, No20 Richard Gasquet—a Wimbledon semi-finalist back in 2007—and No19 Tommy Robredo, and this is a classy, varied field.

Not that the established stars and old hands are the only men on show. In years to come, some of the tennis fans who wander the grounds and watch practice sessions just feet away from the players may recall that they saw a future Grand Slam champion when he was ‘just a boy’.

The No76, 18-year-old Alexander Zverev, and No69, 19-year-old Thanasi Kokkinakis, are both at career highs, both have been setting tongues wagging with their talent, and both are scheduled to try out the Stoke Park grass.

Relaxed and easy-going this tournament may be, but it is also a chance to see the very best rub shoulders with those who, like Djokovic 10 years ago, are destined to be the future best.

Nick Kyrgios splits from his coach just days before Wimbledon