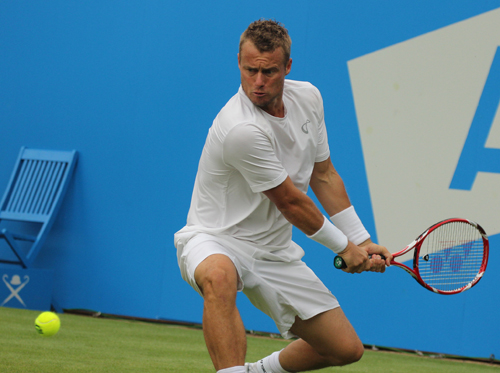 2002 Wimbledon champion and four-time Queen’s champion Lleyton Hewitt, who at the age of 34 is bowing out of professional tennis this year, has been given one of only two wild cards who are not Britons into the men’s singles Wimbledon main draw by the All England Club.

Hewitt, who has more grass titles than anyone but Roger Federer in the Open era, eight of them, lost in the first round at Queen’s this week but was looking forward to getting another grass win under his belt before be bid farewell to the green turf of London.

The other non-Brit to pick up a wild card is Nicolas Mahut. The popular Frenchman, whose old-fashioned serve-and-volley game is designed for grass, is perhaps best-known at Wimbledon for playing the longest match in tennis history, an 11 hour five minute contest against John Isner in the first round in 2010: He lost out 70-68 in the final set.

But last week, Mahut won the grass title in s-Hertogenbosch to surge 37 places in the rankings to No60. Both Mahut’s other singles titles have also come on grass, both of them in 2013.

Notable by her absence thus far—and four more names will be added over the next week—is the injury-plagued former British No1 Laura Robson, who reached No27 in the summer of 2013. She has not played for almost a year and a half due to an ongoing wrist injury that required surgery early last year, though she plans to return to action in Eastbourne next week.

Sixteen-year-old Katie Swan, who made her main-tour debut this week at the Aegon Classic in Birmingham—though she lost—has received a wild card in qualifying with fellow Britons Amanda Carreras, Harriet Dart, Katy Dunne and Gabriella Taylor.