Has Alexandre Lacazette hinted at a transfer to Arsenal this summer by favouriting a tweet? 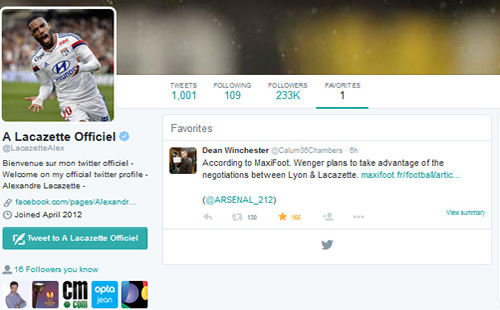 Alexandre Lacazette fuelled the speculation linking him with a transfer to Arsenal this weekend by favouriting a tweet suggesting that he could be on his way to Emirates Stadium.

The 24-year-old has been heavily linked with a move away from Lyon in recent weeks, with the north London club touted as a possible destination for the forward.

The striker, who scored 27 goals in 33 Ligue 1 appearances last season, has also been touted as a possible target for Manchester United as Louis van Gaal looks to bolster his squad.

However, the forward could have his heart set on a move to Arsenal, after he favourited a tweet saying: “Wenger plans to take advantage of negotiations between Lyon & Lacazette.”

He later unfavourited the post amid suggestions that he is keen on a transfer to Arsenal this summer.

France international Lacazette, who is believed to be valued at around £27m, scored 31 goals in 33 games last season and also notched up six assists for the French outfit.