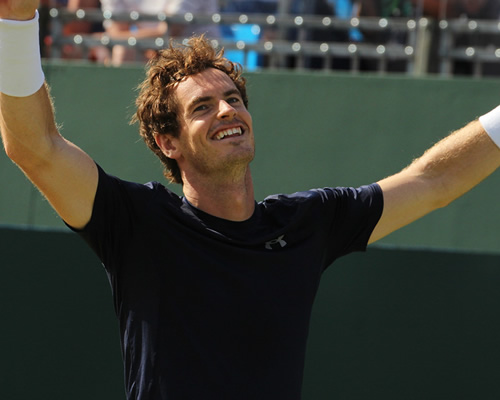 Long before Andy Murray and the GB Davis Cup team knew their fate in the quarter-final tie against old rivals France, they knew who they would face in the semi-finals, should they reach that stage of the competition for the first time in 34 years.

The 28-time champions Australia looked as though, even playing at home and on grass against an unfancied Kazakhstan, they may lose after their big-star names, the fast-rising and charismatic Nick Kyrgios and Thanasi Kokkinakis, lost both the opening singles ties. But step up veteran Lleyton Hewitt, playing in his last year on the tour, and Aussie fortunes were transformed. Hewitt won the doubles with Sam Groth and then closed out the deciding singles rubber to lead his nation onwards—to meet GB or France.

It set up the prospect of truly a tantalising semi-final for each nation, for Australia joined the Davis Cup ‘family’ in 1905, just five years after GB and the USA initiated the competition, and to make matters still more thrilling, the last time GB won the Davis Cup, in the glory days of Fred Perry and Bunny Austin, was in 1936—against Australia.

First there was the small matter of a final day’s play at the Queen’s Club, where GB stood poised for its latest piece of history with a 2-1 lead. World No3 Murray was the hot favourite against whichever of the three high-quality French he faced—and it turned out to be world No11 Gilles Simon.

The super-fit Frenchman was here with some serious grass credentials, too, despite his reputation being that of a baseline backboard on hard courts and clay. He reached the semis here at the Aegon Championships, and went on to the quarters at Nottingham and Wimbledon. And though he had a 12-2 deficit against Murray, he had won their last match in Rotterdam.

But riding a wave of adrenalin after a wonderful doubles performance with brother Jamie—not to mention the Queen’s title and Wimbledon semis—Murray was confident: “I’ve played well against both [Simon and Tsonga] before on grass so that’s obviously a positive.

“Both of them will be fairly fresh going in, it will be a tough match… I’ve been through that before: Just deal with whatever cards I’m dealt tomorrow when I wake up and hopefully play a good match.”

If there was one element that could make all the difference, and lift Murray up and over the finishing line, it was the fans. But the French were in fine co-ordinated voice, and it was they who had the most to cheer as Simon broke Murray in the fourth game. Murray looked heavy-legged and weary already, Simon fresh and spritely, but the Frenchman looked as though he was in trouble when he fell and twisted his knee.

A medical time out helped him back to court, and a couple of fine Murray drop shots to test him out—and draw boos from the French supporters—could not pull the break back. Simon showed real fortitude to survive the biggest challenge to his serve, two break points, three deuces, and he finally held through one of the longest rallies of the match to take the first set, 6-4, in a gruelling 48 minutes.

Murray looked increasingly distressed, lacking energy and unable to generate pace and depth through the court, and a succession of errors gave Simon an immediate break and a 2-0 lead in the second. 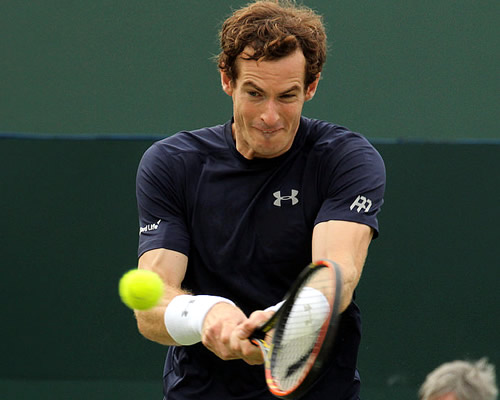 Murray tried slowing things down to preserve his energy, making drops and lobs, sliced and chipped returns, but Simon was too good a player not to take advantage.

Murray only just survived in the seventh game, but allowed himself a small fist-pump when he did. And despite the relentless baseline rallies that at one stage had Murray on his knees in exhaustion, the Briton at last got a break point and took it to level 4-4. It seemed to inject some energy back into his legs and he produced his first 130mph ace of the match on his way to a love hold. In this most demanding of matches, in high heat, humidity and tension, this would demand a tie-break.

Again Murray looked out for the count, going down 4-1, but levelled, and come 6-5, Murray managed one more point against serve to seal the set, 7-6(5).

Already at over two hours, fans were surely questioning whether Murray could sustain this recovery. But he could, through a combination of adrenalin and a roused British contingent. Murray broke in the first game of the third set, now mixing up his plays. He broke again for 3-0, pointing at his head as if to say—think, think! But Simon was not done either and broke back with two net attacks.

However, Murray refocused, held to love and then Simon slipped again to bring up break point. The Briton grabbed the chance and the set, 6-4. He now had growing signs of momentum, energy, and pace, while Simon began to looks drained.

But there was one more point of drama in this gripping battle for the semi-finals, another fall for the Frenchman in the second game—and it would prove to be decisive. A medical time out could not this time mend the ankle pain, and he won just a single point in the next three games: Murray led 5-0. And although the Frenchman rallied bravely at the last to save three break points, Murray finally claimed the prize for a jubilant team and a rocking Queen’s Club, 6-0—in three and a half hours that demanded and got the very last dregs from Murray. 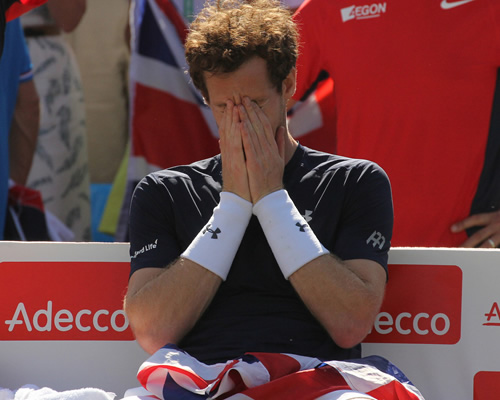 He pumped, jumped, embraced every member of his team, waved the Union flag at the roaring fans and then, finally, collapsed in tears on his chair to be consoled by team captain Leon Smith. Murray put it thus: “You can’t control you’re emotions. When they come they come. It was good to let it out. It’s been a tough ten days or so.”

Smith afterwards tried to put into words the scale of Murray’s achievement: “It’s amazing as you sit and watch the match unfold. It’s incredible how he finds a way to dig as deep as he can, and I won’t embarrass him, it’s phenomenal what he finds within himself.

“You’re sitting there a set and a break down, and that tie break, 4-1 down, but he fights, and he fights and he fights and a couple of those long brutal rallies, he steps out there and serves again or gets ready for the next point.

“I can actually remember sitting there and thinking this is clearly why he does all the hard work. Those moments there, when he digs into something, his dark places of training. And he finds a way to do it, and he does it better than anyone. I have nothing but immense respect.”

And there was, in the end, no better way to sum up Murray’s achievement—three days, three wins, everything left on the court.

Now, though, the team looks forward, and with Murray by far the highest ranked player left in the competition to face Australia, again at home, in September—with either Argentina or Belgium heading to the final in December—a new piece of history beckons for Murray and the GB team.

They are already in the semis for the first time since 1981, and must surely fancy their chances of reaching the final, too.

GB has not won the biggest and most flamboyant cup in tennis since that glorious decade when this nation won four titles in a row, 1933 to 1936, with Fred Perry and Bunny Austin the residing heroes. It’s too soon to begin bracketing Murray with another Perry milestone, but it is not entirely fanciful either.