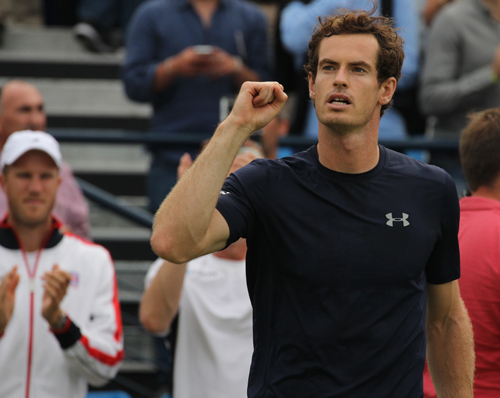 If the mood was a little flat after James Ward was beaten in relatively straightforward order by Gilles Simon, it was soon fanned into flames when Andy Murray took to court for the second rubber of the day.

This was no easy task that lay ahead of him, the formidable power and flair of Frenchman Jo-Wilfried Tsonga, a man who had two Wimbledon semis to his name and who had twice taken Murray to four tough sets at those very Championships. Add in that Murray had beaten Tsonga, over three long sets, in a Queen’s final and a semi-final, and their singles rubber on Day 1 promised to be close.

Murray assessed the nature of the problem: “He’s a very good athlete, a strong guy, an explosive player, he can serve big, he can get to the net quickly and he can come up with some great shots. He likes the grass, he likes coming forward and playing at the net. I’ll be trying to play a very consistent match. He’s a tough player to beat on any surface.”

But Murray’s form has been as good this season as it has ever been: He has played more matches than any other player and only Novak Djokovic has won more. Should Murray win both his singles rubbers in London this weekend, he would even close that gap.

As well as the Queen’s title and a semi run in Wimbledon, Murray reached the semis of the French Open after claiming the Munich and Madrid titles too. He had also beaten Tsonga 10 times in 12 meetings, though he came unstuck against the Frenchman as Tsonga headed to the Toronto Masters title last year.

Tsonga, though, did not play a match this year until the start of April due to an arm injury, and had played only three matches on grass. All the odds pointed to a Murray win—and with the British fans in renewed and united voice for their home hero, even the volume was now in his favour.

But Tsonga had certainly come to play, and there was barely a chink in the serving of either until the very end of the first set when Murray had a break chance. Tsonga came through three deuces to hold for 5-5, and Murray also had to survive a tense game to go 6-5. It looked like a tie-break was inevitable, but Murray’s famed returning caused Tsonga a series of problems as the Frenchman missed a couple of first serves. Attempting to pick up balls from his feet as he hurtled to the net, Tsonga made one too many errors to hand over break and set to Murray.

From the Briton’s body language, it looked as although he had already won the rubber: He leaped in the air, roaring, pumping his fist to the jubilant crowd.

Tsonga bounced back at the start of the second set to break with some scintillating play—a forehand pass, a great net pick-up, and Murray hit a forehand long. But serving at 3-1, Tsonga slipped over and it seemed to disrupt his focus: Murray ran him ragged across the baseline to get three break points, and another return of serve at Tsonga’s feet broke to level at 3-3.

This time, they would decide the match in a tie-break, and what a tense affair it was. Tsonga was rising to the challenge again, trying to keep the rallies short with some big serves and first-strike follow-ups. It earned him a 3-0 lead but Murray, despite also taking a tumble, levelled and they stayed neck-and-neck through three changes of end, locked at 3-3, 6-6 and 9-9 with neither man getting the chance to serve on set point. Finally it was Murray who scored the key point against serve and to steal it, 12-10.

And that proved to be the turning point of the match. Murray broke in the first game of the third set, saved a break point in the next and again in the fourth, now calling on the chanting crowd for still more noise, still more support—and they responded. After a slight blip, he served out the match 6-2.

It’s hard to imagine that the oh-so-expensive, leafy environs of Kensington, where the Queen’s Club is hemmed in, have ever heard such volume—from crowds and from the cranked-up music at every change of ends, and this was only to level the tie at 1-1.

One can only imagine the scenes if this tie goes to a fifth and deciding rubber, which it looks destined to do. The doubles rubber is impossible to call, with a Grand Slam final doubles champion in each team in Nicolas Mahut and Jamie Murray. Whether brother Andy takes to court for that crucial match remains to be seen, but the French have fellow Wimbledon semi-finalist Richard Gasquet in the wings both for the doubles and also, if needs be, the reverse singles.

Leon Smith and the team would not make up their minds about the doubles make-up until later tonight, but Murray was confident he could handle it:
“It’s tennis: I play a lot of tennis. I hit loads of returns, serves, volleys, and lot of doubles is about instinct and that’s something you pick up from either playing lots of doubles or years of playing the game.

“I feel fine just now—I mean I’m tired in general, I don’t feel perfect just now but I didn’t expect that after the last few months. But I get to have a break after this weekend. Obviously want to try and give the best that I can for the team, and lucky we have options in that rubber. We need to be smart and I need to be very honest of how I’m feeling and make the best decision possible with all of the team.”

Meanwhile, Murray’s Davis Cup singles record has moved on to an impressive 22-2, but he is also 4/5 in doubles, so it is a tempting call for captain Leon Smith.

Perhaps, too, nerves will play their part. France is hoping to reach its fourth semi-final in six years, and has lost three finals since last winning the trophy in 2001. But then Great Britain also has some history on the line. It has not reached the last four since 1981—and has not won since that glorious decade when this nation won four titles in a row, 1933 go 1936, with Fred Perry and Bunny Austin the residing heroes.

It’s too soon to begin bracketing Murray with another Perry milestone, but it is not entirely fanciful either.