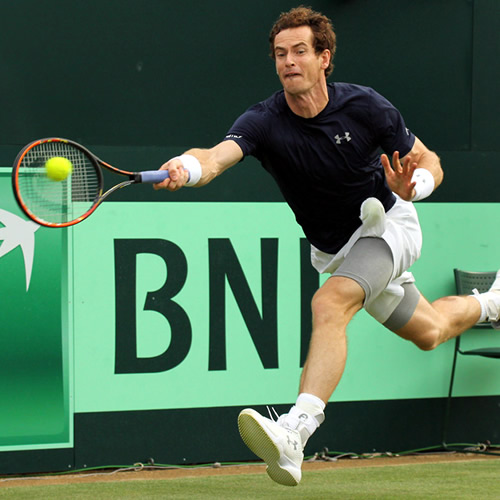 In a tie between rivals dating back for over a century, between rivals who have both won the Davis Cup nine times and that now boast the highest-ranked players on quarter-final weekend, the doubles rubber was always destined to be a vital feature.

World No3 Andy Murray played a clutch rubber against world No12 Jo-Wilfried Tsonga, sealing a tough three-sets win, but No89 James Ward had his work cut out, as the rankings promised, against France’s resurgent No11 Gilles Simon, losing in three sets.

The seedings suggested that the results of the reverse singles, come Sunday, would be the same—though Ward has performed heroic acts on the Davis Cup stage before, not least in coming back from two sets down to beat John Isner, 15-13 in the first round this March.

But against Tsonga—if Tsonga it was, for France has such depth that it could substitute in No13 and Wimbledon semi-finalist Richard Gasquet—the odds were stacked against Ward. The Frenchman had won their only previous match, on this very court in 2011, in straight sets.

And then there was the question of preserving Murray’s strength for the Simon match after playing more matches this year than any other man. What’s more, the Briton would be only too aware that this dangerous Frenchman beat him in their last meeting in Rotterdam this year, and that Simon’s form on grass had been a revelation this season: Semis here at Queen’s and quarters at Nottingham and Wimbledon.

As Murray admitted, when asked if he was willing and able to step into the doubles rubber: “I feel fine just now. I mean I’m tired in general, I don’t feel perfect just now, but I didn’t expect that after the last few months. But I get to have a break after this weekend. Obviously I want to try and give the best that I can for the team, and it’s lucky we have options in that rubber. We need to be smart and I need to be very honest about how I’m feeling and make the best decision possible with all of the team.”

Come the day, and before the deadline of an hour before the match was scheduled to start, the news came that Murray would indeed take the doubles spot alongside brother Jamie—but also that Tsonga would replace Gasquet in the French team. Tsonga, no mean net exponent himself, played alongside a doubles player just as proficient and successful as the elder Murray brother: Nicolas Mahut is also a Grand Slam doubles finalist, and more than that, had lately won the singles grass title at s-Hertogenbosch.

It was not as though the Murrays had played together very often or very recently. Andy had played just three doubles events this year, with three different partners, and had not played with his brother in two and a half years—and the last time they played together in Davis Cup was four years ago. But on paper, they were a good combination: tall, fast, one a right-hander the other a leftie, and with a great off-court bond.

Tsonga and Mahut, though, took advantage at the start, breaking the Andy Murray serve straight away. Mahut, in particular, showed all his doubles expertise with some sharp interception winners at the net, and it was just such a play at the other end of the set that sealed it, 6-4—a French smash to hold.

But already there were signs that the brothers from Dunblane were starting to gel, and the combination of Andy Murray’s serving and brother Jamie’s net skills ensured they would not face another break point until the end of the match. Instead, it was the big-serving Tsonga who was broken in the fourth game of the second set, and Jamie served out the set in little more than half an hour, 6-3.

The third set would become the determining one of the rubber, now with all four men playing wonderful doubles tennis. Andy Murray in particular was showing just how adept he is at the net—a talent not always displayed in his singles tennis. Both brothers smashed time and again, as Mahut and Tsonga tried in vain to lift defensive lobs. It was adrenalin-pumping stuff, both for players and the high-volume fans alike.

They edged towards a tie-break, when all at once it looked as though disaster had struck the British team. Both Murrays slipped heavily, with Andy rolling in pain with a twisted hip. But after a medical time out and some oral meds, he returned, Tsonga held and Murray resorted to his best tactical serving thus far, kicking the ball out wide. He held and it went to a tie-break.

Here was the final momentum shift, and it could have gone either way as they reached 5-5. Jamie held serve for 6-5 and Tsonga lost the decisive point: The British led, 7-6(5).

Such was the fever in the crowd that there was a disruptive shout in the opening game of the fourth, one that brought up break point. Mahut smashed a ball into the net and the British broke for 2-0. With the French in disarray, the Brits looked as though they had played together for years. They broke again for 4-0, held to love with two aces and winning smash, 5-0, and despite facing the only other break point since the opening game, served it out—appropriately enough with a winning smash, 5-1.

GB captain Leon Smith, asked about the importance of the doubles rubber before the tie, said: “If you go on paper, then of course the doubles becomes the obvious [important] one but you just can’t do that, every match is too difficult, everyone’s got a chance… And in Davis Cup before, we’ve seen things happen, upsets of rankings… it’s very different playing for your country than for an individual and some players do that better than others.”

But today, he admitted this rubber was, indeed, of key importance, though was quick to point out that Murray’s encounter against Simon to open the final day was far from straightforward. And should it go to a fifth, given that the French have the option of a fresh, in-form Gasquet to play Ward, the tables could be well and truly turned.

But with the doubles point in the bag, there is now a real chance for GB to reach the World Group semis for the first time in 34 years.

Back then, they lost to Argentina, 5-0: This year, they would play Belgium or Australia—at home. Argentina, without Juan Martin del Potro, remains in the competition, currently leading a Novak Djokovic-less Serbia. The countries of Murray’s other major rivals, Spain and Switzerland, are already missing.

Suddenly, if Murray remains fit, there is a real belief that the GB story could run all the way to the end of the year.