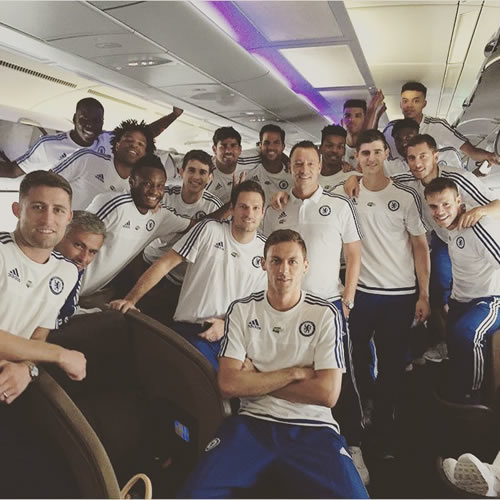 Oscar shared this picture on Instagram on Wednesday Photo: Oscar/Instagram

Eden Hazard was joined by the rest of the Chelsea squad as the Blues prepared to jet off to Canada to begin their pre-season preparations.

Jose Mourinho’s squad was reunited following their summer holidays and they all looked in good spirits as they begin to step up their training regime ahead of their Premier League title defence.

PFA player of the year Hazard was all smiles along with the rest of his team-mates, including new signing Asmir Begovic and Chelsea boss Jose Mourinho, ahead of their tour of North America.

Midfielder Oscar posted the picture above on his Instagram account on Wednesday afternoon and wrote: “On our way to Canada with the team!!!! Let’s go!!!! #Chelseafc”

The Belgium international scored 14 top-flight goals and made nine assists in the Premier League to help Chelsea win the league.

He also netted twice in the League Cup as Mourinho’s men secured a cup and league double in the Portuguese coach’s second season back at Stamford Bridge.