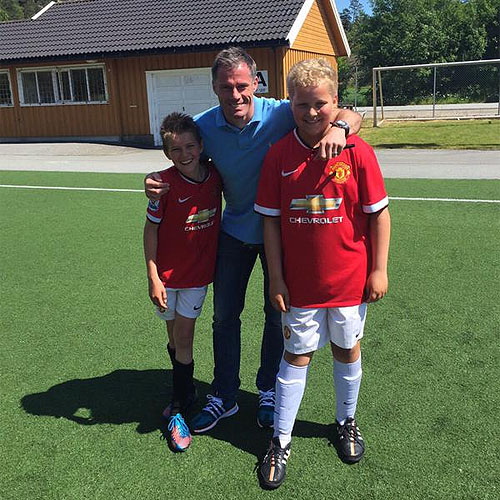 The first Monday Night Football of the new season will be a must-see after Gary Neville confirmed Jamie Carragher will wear a Manchester United shirt for the Sky Sports show.

The former England centre-half had a wager with the seven-time Premier League winner that Tottenham flop Paulinho would score at least 15 goals in his first season at White Hart Lane.

The Brazil international, who has since moved to Chinese side Guangzhou Evergrand this summer, only managed to net six times in the Premier League for the north London side over the past two seasons.

Initially, Carragher appeared to be bailing on the bet after he posted a snap with two United fans and insisted that was his best effort for Neville.

This is as good as your going to get @GNev2 pic.twitter.com/SOWZjSL1WH

However, the Liverpool legend appears to have had a U-turn after Neville confirmed that Carragher will wear the Red Devils shirt that he was sent on the first MNF of the season.

Just been confirmed @Carra23 has received my United shirt. He will wear it on the 9th August " First MNF of the season" think we can 👏 him

Carragher and Neville have forged a formidable partnership on the Sky Sports show since the former Liverpool defender retired from professional football in 2013.