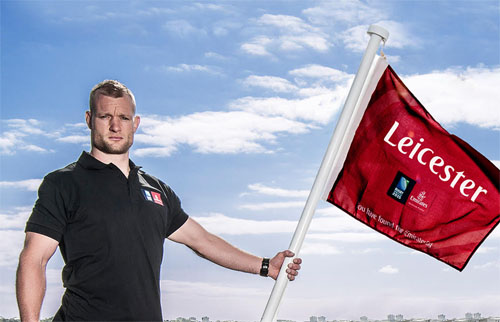 Jamie Noon believes the England coaches and selectors should relax their stance on not selecting overseas-based players and pick on ability and form alone.

Noon, who represented England 38 times while playing for Newcastle Falcons before making the switch to French club Brive, suggested that players plying their trade outside of the Aviva Premiership should be given a fair crack at the whip.

It isn’t simply down to money either, the players that would be moving over to France and succeeding will already be on big money in the Premiership so it isn’t simply a case of moving to a French team and trebling their wages

The former Red Rose centre added that relaxing the rules wouldn’t necessarily cause the predicted exodus by many of the English game’s biggest stars.

“If you look at the way the game was when players could move freely to play for whatever team they want to, the vast majority of England internationals were still based in the Premiership,” Noon told The Sport Review.

“I don’t think you would see lots of players going over if they were given the option, partly because it isn’t beneficial for every single player, some players thrive while others struggle.

“Just look at Steffan Armitage, he is one of the best back-row forwards in the world and isn’t anywhere near the England squad. Jonny (Wilkinson) played for England in the 2011 World Cup when he was already in France so why not Steffan or Nick Abendanon who has been phenomenal this season?

“It isn’t simply down to money either, the players that would be moving over to France and succeeding will already be on big money in the Premiership so it isn’t simply a case of moving to a French team and trebling their wages.”

The high-profile exit of David Strettle from the England camp in favour of a move to French side Clermont Auvergne suggests the exodus could already be beginning with the lure of a new challenge and greater earning potential difficult to ignore for a lot of players.

Noon, though, disagrees and suggests players moving to other clubs is purely a personal decision, but thinks Strettle will thrive in his new surroundings.

“It is interesting about Stretts (Strettle) because I don’t know the ins and outs of it so perhaps it was a case of he wasn’t maybe expecting an England call,” he added.

“Perhaps there’s been added pressure from Clermont due to the fact they will be losing a number of players already to the World Cup, it could be a number of things.

“He could want to get over there and settle his family into their new home before the start of the new season. One thing is for sure, Stretts has the game to do really well in France and Clermont is a great fit for him.

“They are one of the clubs closest to the Premiership in terms of set up and professionalism so he will do really well.”

Jamie Noon is an Emirates ambassador for Rugby, encouraging young fans to find the flag hidden in Leicester on the 27th of June to win the chance to lead a team out at Rugby World Cup 2015. Visit Emirates Facebook, Twitter or Instagram to follow the #EmiratesFlag