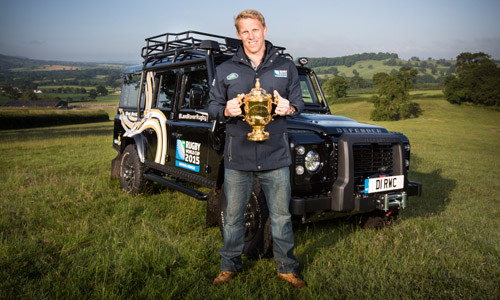 Lewis Moody fears the 2015 World Cup may have come slightly too soon for Sam Burgess but the former World Cup winner admits he is keen to see the rugby league convert included in the final squad.

Burgess only made his rugby union debut at the end of November but his promising performances for Bath in the second half of the season earned him a call-up to Stuart Lancaster’s 50-man pre-World Cup training camp.

The debate rages on as to whether the 26-year-old is best suited to play in the back row or the centres and Moody believes that uncertainty could damage his chances of playing in the tournament.

But the former flanker, who lifted the World Cup in 2003, is adamant that the back row is Burgess’ natural home and is convinced he could be just the X-factor England need.

“Burgess won’t be seen as a back I don’t think – he’ll be used as a back-rower. I just don’t see how England could use him as a back,” said Moody, speaking at the Land Rover Experience Centre in Devon as part of the Rugby World Cup Trophy Tour.

“So, he’s only got to be considered in one position and the majority of last year he played at six. To consider him at 12 would just be ridiculous in my mind.

“I’d love to see Sam involved in this World Cup but I don’t know if he’s got enough time to prove to the coaches that he can be trusted as a back-rower to deliver all the basics.

“Things like body shape in the scrum, driving mauls, line-outs – you’re going to be integral to all those things. One wrong element there could cost you massively.

“He’s such an exciting player that I hope he can learn quick enough to prove that he’s got what it takes.”

Burgess is undoubtedly a man for the big occasion as proven by winning the Clive Churchill Medal for the best player in the 2014 NRL Grand Final as a South Sydney Rabbitohs player – despite breaking his cheekbone in the first tackle of the game.

He may still be adapting to some of the nuances of rugby union but Moody is adamant that once he masters those, he could well be a future Bath captain.

“There’s no doubting the impact Burgess can make in a game as proven in the Premiership final and he’s clearly a big game player,” added Moody.

“The hits he puts in, the offloads and the carries are all there but it’s just the technical aspects.

“You can see how he plays on the pitch – he wants to compete and he wants to be at the highest level, throwing himself into contests.

“For Bath, I see him being the potential leader after Stuart Hooper retires, although that won’t be this year.”

Lewis Moody is a Land Rover ambassador. Land Rover is a Worldwide Partner of Rugby World Cup 2015 and is recruiting all 96 official mascots for the tournament as part of its ‘We Deal In Real’ campaign. Follow @LandRoverRugby #WeDealInReal