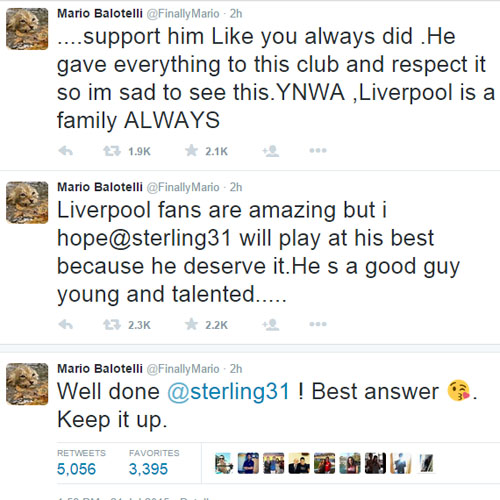 Mario Balotelli has his say on Raheem Sterling's move

Mario Balotelli has leapt to the defence of Raheem Sterling after the Manchester City forward faced a backlash from Liverpool supporters on social media on Tuesday afternoon.

Sterling scored his first goal for the Citizens against Roma in a pre-season friendly this afternoon after he completed his much-anticipated £49m move to the Premier League runners-up last week.

The England international has been branded as greedy by some Liverpool supporters after Sterling rejected a £100,000-a-week contract offer from the Reds earlier this year and forced through a move to The Etihad.

Balotelli, who has largely disappointed following his £16m move to Anfield from AC Milan last summer, risked the wrath of his own supporters after he congratulated Sterling on his first goal for City.

Unsurprisingly, Balotelli received a torrent of criticism from Liverpool fans, who were unhappy with the striker’s post on the social media site.

However, the Italy international was undeterred as he went on to endorse Sterling’s decision to move to his former club City.

Liverpool fans are amazing but i [email protected] will play at his best because he deserve it.He s a good guy young and talented…..

….support him Like you always did .He gave everything to this club and respect it so im sad to see this.YNWA ,Liverpool is a family ALWAYS

Schweinsteiger: It’s an honour to play for Man United with Rooney