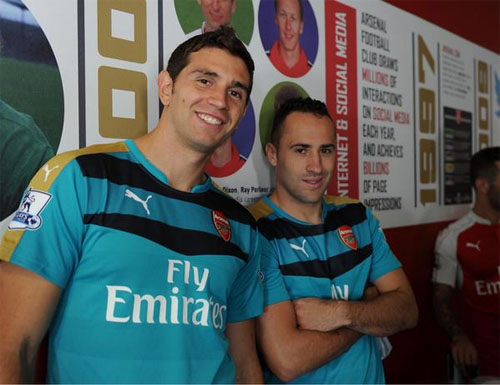 The 22-year-old shot stopper is vying with Arsenal summer signing Petr Cech and Colombia international Ospina for a starting spot in Arsene Wenger’s side.

Cech arrived at Emirates Stadium in an £11m deal from Premier League champions Chelsea earlier this month after he won his fourth English top-flight crown.

But Martinez and Ospina looked relaxed about the increased competition for places at the north London side in a snap that the youngster posted on Twitter.

Ospina managed to dislodge Wojciech Szczesny as Wenger’s first-choice goalkeeper last January after the Poland international produced a horror display in a 2-0 loss to Southampton on New Year’s Day.

Szczesny completed a move to Serie A side Roma on a season-long loan after Cech completed his much-anticipated moved to Arsenal.

Martinez moved to the Gunners from Independiente in 2010.