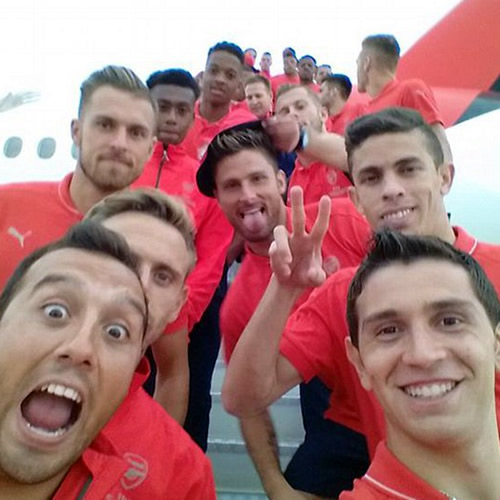 Damian Martinez managed to squeeze and impressive number of players into a selfie as Arsenal prepared for their pre-season trip to Singapore on Sunday.

The Gunners goalkeeper snapped a picture of Arsene Wenger’s squad on the steps of their Emirates aeroplane as they prepared to jet off to Asia to continue their preparations for the new campaign.

Martinez shared the picture above on his Twitter account on Sunday and wrote: “On our way to #Singapore!!! Let’s go @Arsenal! #ArsenalSingapore #PreSeason #EM26”

Meanwhile, Arsenal midfielder Aaron Ramsey shared the picture below of himself with Kieran Gibbs ahead of the north London club’s flight to Singapore.

He posted the photo on Instagram and wrote: “Flying companion @kierangibbs #ArsenalSingapore”

The Gunners take on Chelsea in the Community Shield at Wembley the weekend before the start of the new top-flight season.