Alexis Sanchez looks to be enjoying his summer holiday 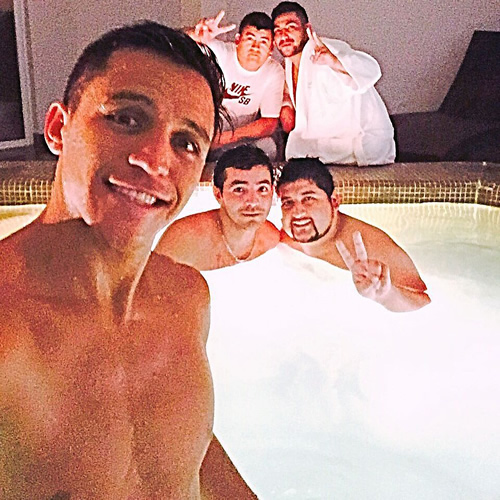 Alexis Sanchez certainly seems to be making the most of his extended summer holiday as his Arsenal team-mates prepare to compete in this weekend’s Emirates Cup.

The Chile international is currently enjoying some well-earned downtime after helping to inspire his country to Copa America glory earlier this month.

Sanchez has been given an extended summer holiday as Arsene Wenger’s men step up their pre-season preparations, with the forward not due to report back to London Colney until 3 August.

And the 26-year-old seems to be making the most of his chance to put his feet up and relax, if his latest post on Instagram is anything to go by.

Sanchez shared the picture above of himself relaxing with some friends on the photo-sharing app and wrote: “Selfie con friends .. ☺️ selfie with friends …. Jacuzzi ☺️”

Arsenal are in action in the Emirates Cup at their home ground this weekend.

Photos: Van Gaal deep in chat with Schweinsteiger during training