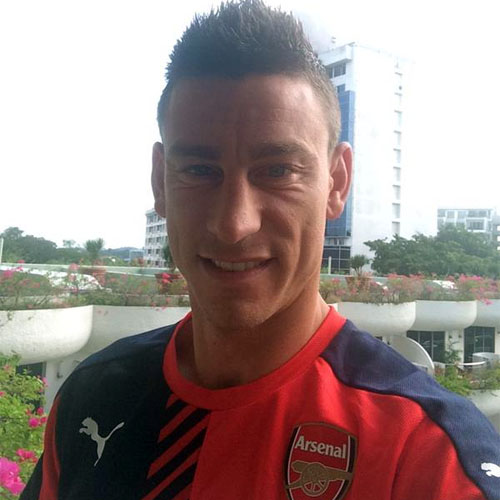 Laurent Koscielny is one of Arsenal’s least prolific social media users, but the Gunners defender treated his Twitter followers to a rare selfie on Tuesday morning.

The FA Cup holders landed in Singapore for the start of their pre-season tour ahead of the Barclays Trophy earlier this week.

And perhaps swept away by his new-found tv star status in the Asian country, Koscielny posted the above snap on Twitter.

Koscielny will be using Arsenal’s pre-season tour as an opportunity to get to know his new team-mate and Czech Republic goalkeeper Petr Cech.

The 33-year-old moved to the north London side from Premier League champions Chelsea in an £11m deal earlier this month.

The Arsenal centre-half has become a key part of Arsene Wenger’s side in recent years, and Koscielny scored three goals in 25 Premier League appearances for the Gunners last term.