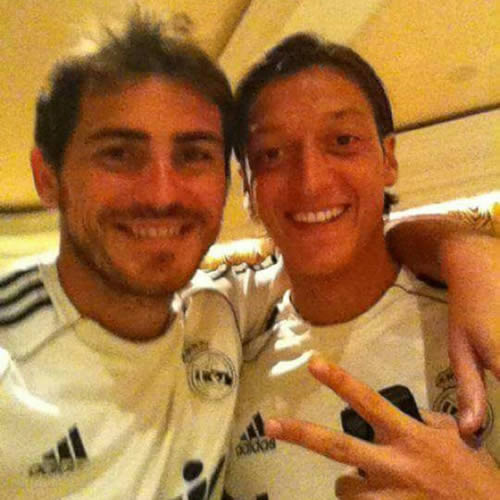 Mesut Ozil took to social media on Sunday afternoon to pay tribute to Iker Casillas after the Real Madrid goalkeeper announced that he is set to leave the Spanish club to join Porto on a permanent deal.

Casillas leaves Real after 25 years with the Spanish side and having won three Champions Leagues and five Liga titles.

Arsenal star Ozil played alongside Casillas during his spell at Real Madrid, and the German World Cup winner used his Instagram account to send his best wishes to the goalkeeper on Sunday afternoon.

Ozil shared the picture above on his Instagram account and wrote: “Iker Casillas is leaving Real Madrid after 25 years as one of the best goal keepers and as a living club legend. Iker my friend, I wish you all the best and many more titles at FC Porto!!!”

Casillas’ transfer to Porto has fuelled speculation suggesting that Real Madrid are poised to make a big-money bid to sign David De Gea from Manchester United this summer.

Casillas joined Real Madrid’s youth academy in 1990 and has spent his career at the club, winning 17 major honours with the Spanish outfit.