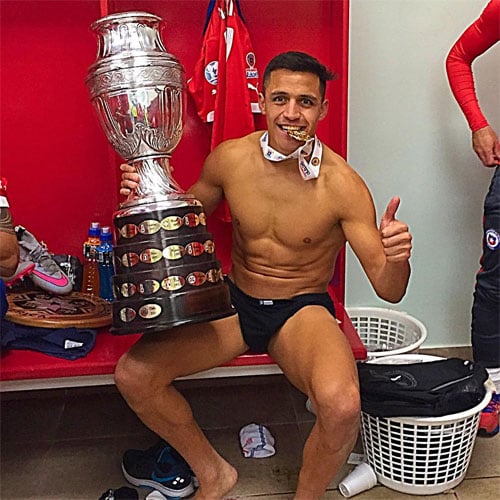 When you’re a Copa America winner, you can do what you want.

So Alexis Sanchez can be forgiven for forgetting to throw on any clothes as the Arsenal man posed with the Copa America trophy.

Chile won the competition for the first time on Saturday night after a dramatic penalty shootout victory over Argentina following a stalemate after 120 minutes of play.

The hosts sealed the Copa America on home turf thanks to spot-kick efforts from Arturo Vidal, Matias Fernandez, Charles Aranguiz before Sanchez dispatched the winning penalty.

And the Arsenal forward posted a snap with the Copa America silverware in his underpants on his Instagram page in the early hours of Sunday morning.

The 26-year-old, who was reportedly nursing an injury throughout the tournament, scored one goal and made one assist in six Copa America appearances.

Sanchez enjoyed a good first season at Arsenal after he netted 24 times in 49 games in all competitions as the Gunners won the FA Cup and finished third.