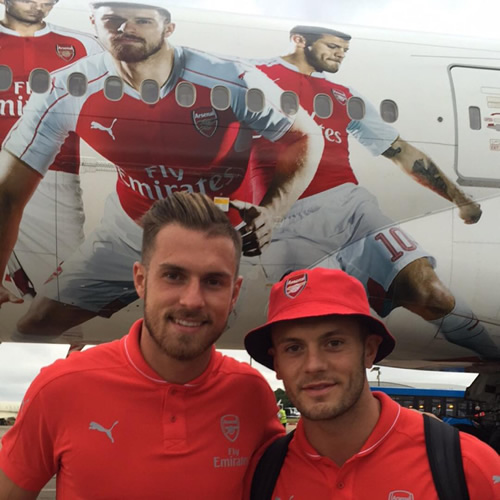 Aaron Ramsey and Jack Wilshere are probably used to seeing their faces on promotional campaigns – but the Arsenal duo were treated to a surprise on Sunday ahead of the Gunners’ trip to Singapore.

Arsene Wenger’s squad headed to Asia in a specially-designed Arsenal Emirates aeroplane, featuring images of some of the north London club’s key players on the fuselage.

Wilshere and Ramsey couldn’t help but pose for a snap in front of their larger-than-life versions ahead of the flight on Sunday evening.

Midfielder Wilshere shared the picture above on his Instagram account and wrote: “Thanks to @Emirates for hooking us up with this amazing plane!!!”

Meanwhile, Ramsey posted his own picture on the photo-sharing app and added: “Bit surreal but very cool to see myself on the side of an Emirates plane @jackwilshere #ArsenalSingapore”

The Gunners take on Chelsea in the Community Shield at Wembley before the opening game of the season.