The Arsenal squad enjoyed some downtime in Singapore on Friday night... 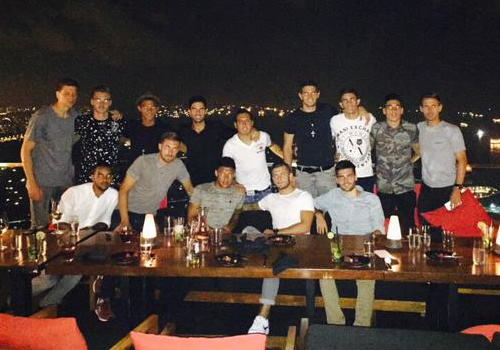 The Arsenal squad enjoyed a meal in Singapore on Thursday Photo: Damian Martinez/Twitter

Arsenal’s squad looked to be in good spirits after they enjoyed a fine meal in Singapore as they continue their pre-season preparations.

Arsene Wenger’s side are currently on tour in Singapore as they compete in the Barclays Asia Trophy ahead of the start of the new Premier League campaign.

Arsenal thrashed a Singapore Select XI 4-0 on Wednesday to book their place in the final of the pre-season tournament against Everton on Saturday.

And the north Londoners clearly enjoyed some downtime on Thursday evening, as they dined at a restaurant with some breathtaking views of Singapore.

Goalkeeper Damian Martinez posted the picture above on his Twitter account and wrote: “We had another great evening with the team yesterday. Delicious food and awesome views 👌 #ArsenalSingapore #BAT2015”

Arsenal, who finished third last season, return to Premier League action with a home clash against West Ham United on the opening weekend of the season.

The Gunners take on Chelsea in the Community Shield at Wembley the weekend before the new season gets under way.

Photo: Liverpool defender can’t wait to be reunited with his ‘fatty’