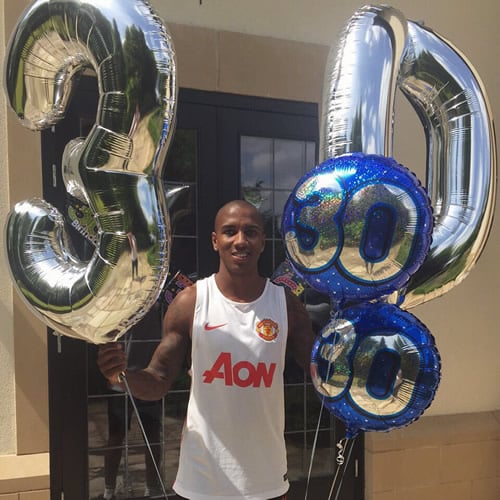 Ashley Young took to social media on Thursday afternoon to thank his Manchester United team-mates for their balloon surprise as the winger celebrated his 30th birthday.

The England international was all smiles as he posed for a picture with his gift from his team-mates at United’s Carrington training ground.

The former Aston Villa man uploaded the picture above onto his Instagram account and wrote: “Came into training to find these today, cheers lads! #ashleyold”

Young played a key role in United’s first-team last season as he scored two goals and made five assists in 26 Premier League games for the Red Devils.

Louis van Gaal’s side are back in pre-season training at Carrington as they continue their preparations for the new Premier League season.

United are due to head off to the United States on Monday for their pre-season tour as they bid to get their fitness levels up ahead of their Premier League opener against Tottenham Hotspur at Old Trafford next month.

Three reasons why Liverpool can flourish without Raheem Sterling