John Terry and Gary Cahill look pleased to be back in pre-season training with Chelsea... 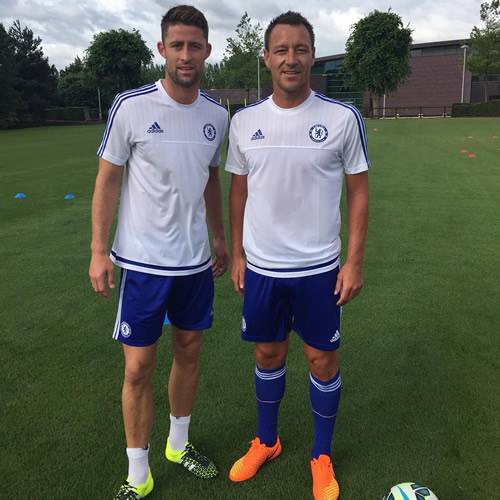 John Terry and Gary Cahill were all smiles after taking part in a pre-season session at Chelsea’s Cobham training ground on Wednesday.

The defensive duo are currently in London as the pair look to step up their preparations for the forthcoming 2015-16 Premier League season.

Terry has been keeping his followers up to date on social media as the veteran defender kept fit while on holiday during the off-season.

And the former England captain took to Instagram on Wednesday morning to reveal his delight at continuing his preparations for the new campaign.

Terry shared the photo above on his Instagram account on Wednesday and wrote: “Great session with @garyjcahill @nikefootball #Cobham”

Terry, who was named in the PFA team of the year after an impressive season for the champions, was capped 78 times by England, scoring six goals for his country. He announced his international retirement in September 2012.